15 dead, over 60 missing in Kerala landslide 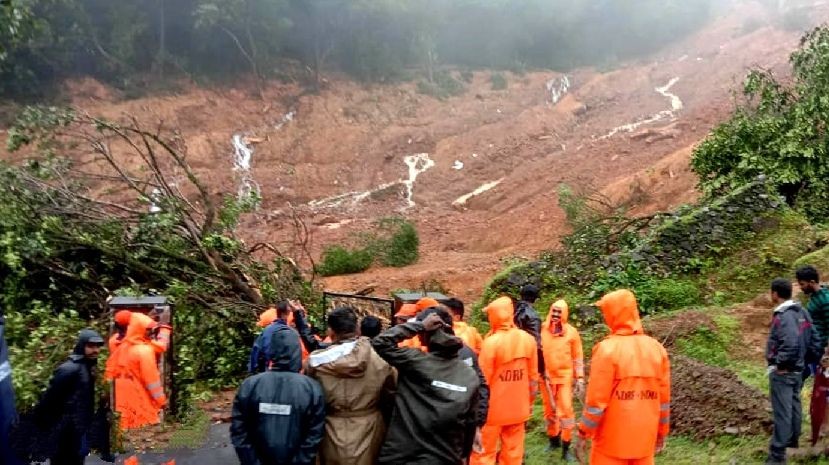 Thiruvananthapuram, August 7 (IANS) Heavy rain followed by a landslide at Rajamalai in Idukki district on Thursday night has left atleast 15 persons dead, including a child, and more than 60 others are reported missing, a police official said on Friday.

The latest reports indicate that there were nearly 100 people in the locality, most of whom had returned to the area following the Covid scare. The landslide occurred after heavy rains over the last few days in the area mostly inhabited by tea estate workers.

The place where the tragedy occurred is nearly 30 km from the popular tourist destination Munnar.

A police official taking part in the rescue operations said 15 bodies had been recovered and nearly 67 people were missing.

Meanwhile, the state government has appointed IGP Gopesh Agarwal as special officer to coordinate the rescue and relief operations in the locality.

A 200-member team of Kerala police and other teams from the NDRF, fire brigade, local people and volunteers have reached the spot for rescue work.

By the time of filing this report, 16 persons had been rescued.

Meanwhile, a larger tragedy was averted when a bridge connecting the accident site to the main road, which was partially damaged, was quickly made motorable enabling numerous ambulances to take the injured to the hospital.

The women of the locality work in tea estates of the area while most men work as jeep drivers. The authorities got to know of the tragedy after two residents reached a nearby forest station and informed officials late Thursday night.

Deepan, one of the four survivors admitted to a hospital in Munnar said he had no clue about his father and his wife who were with him in the house when the landslide occurred. His mother has, however, been moved to the Kottayam Medical College hospital in a serious condition.

"For the past 10 days, it has been pouring. The landslide occurred around 10.30 pm on Thursday. I do not know about my father, wife, and my brother's family. There are three rows of houses in the cluster where nearly 80 people live. Do not know what has happened to them. Nearly 30 jeeps were buried in the landslide," Deepan said.

The Kerala government's efforts to get an air rescue team to the spot failed due to inclement weather. However, two teams of National Disaster Response Force (NDRF) were reportedly on the way to the disaster site.

All communication lines to the area have been snapped and roads to the hilly area are blocked due to uprooting of trees, officials said.

State Power minister MM Mani, who hails from the district, said the landslide had occurred at a place where tea estate workers were staying.

"I will not quote any figure as I do not have sufficient information. The place is at the top of a hill. We are awaiting a response, the local legislator is also going to the spot. All emergency services have been pressed into service," Mani added.

However, area resident Parthasarathy earlier told the media that nearly 80 tea estate workers and their families resided in the area where the landslide occurred.
Revenue minister E Chandrasekheran said he was in touch with the Idukki revenue officials and that emergency rescue teams were on the way to the spot. Information on the tragedy is being collated, he added.

The IMD has announced a red alert in the districts of Kottayam, Pathanamthitta, Idukki and Wayanad as heavy rains have submerged a few places in these districts.

Twenty-one people in Wayanad were rescued across a surging river using ropes and nets.

The authorities have set up relief camps in these areas.