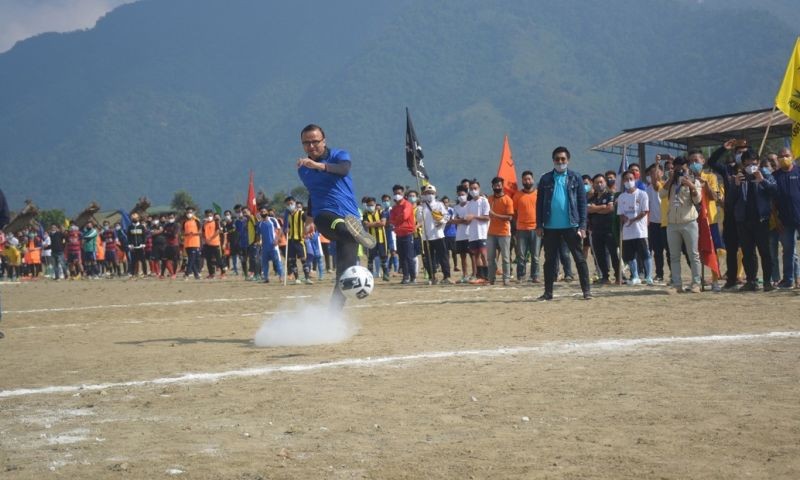 TUENSANG, NOVEMBER 19 (MExN): The 28th Loyem Memorial Penalty Shootout organised by the Confederation of Chang Students’ Union (CCSU) kicked off in Tuensang on November 19 under the theme ‘Kick Social Discrimination.’

Altogether, 46 teams have registered for the tournament which will end on November 20.

Chief Guest, Kumar Ramnikant, Deputy Commissioner of Tuensang spoke on the theme of the tournament and stated that “social discrimination is something which I think we all feel in our lifetime in many places and today’s event will mark as kicking it away.”

“We as a human being it is our inherent nature to discriminate but we need to end this habit. Especially at a time like today we discriminate Corona patients and this is happening in our society. Today under this theme we must end social discrimination,” he said

The DC meanwhile encouraged the players to play with full heart, team spirit and without cheating. “Organising a tournament like this during pandemic is a huge risk but I can see that the organisers have taken proper measures,” Ramnikant stated.

M Mongba, Convenor of LMT in his welcome address stated that the initiative of CCSU to organise Loyem Memorial Trophy every year had been faced with an uphill task this year due to the COVID-19 pandemic. After thorough deliberations and consultation in order not to lose or change the pace of this prestigious running trophy, the members decided to hold a penalty shootout for football lovers in the district.