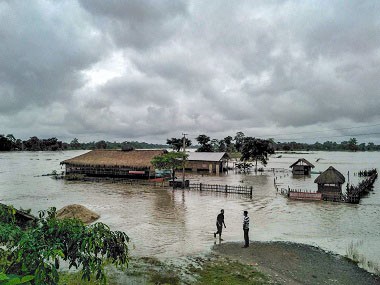 Guwahati, August 7 (PTI): The flood situation in Assam further improved on Friday as the water receded from four more districts and currently 12,528 people and 5,375 hectare of cropland across six districts are affected, a government bulletin said.

Flood water ebbed from Bongaigaon, Goalpara, Kamrup and Nagaon districts since Thursday when 84,100 people in 177 villages of 10 districts were hit by the calamity.

Goalpara has been the worst-affected district for the last several days.

The Assam State Disaster Management Authority (ASDMA) said in its bulletin that only Dhemaji, Baksa, Chirang, Kokrajhar, Kamrup Metropolitan and Morigaon districts are affected by the deluge now.

Kokrajhar is now the worst-hit district with 4,272 people affected, while 3,000 people in Baksa, 2,030 in Morigaon and 1,958 are suffering from the calamity respectively, ASDMA said.

Flood and landslides claimed 136 lives this year in Assam. While 110 people died in flood-related incidents, 26 were killed in landslides.

With the improvement in flood situation, only two district authorities are running a couple of relief camps and distribution centres where 201 people are currently lodged.

The Brahmaputra river is flowing above the danger level at Neamatighat in Jorhat district, the bulletin said.

Breach of an embankment was reported from Kachunil under Binni subdivision in Baksa district, ASDMA said.

The deluge has so far claimed the lives of 157 animals, while 174 others were rescued in Kaziranga National Park, the bulletin said.