Australia tells U.S. it has no intention of injuring important China ties 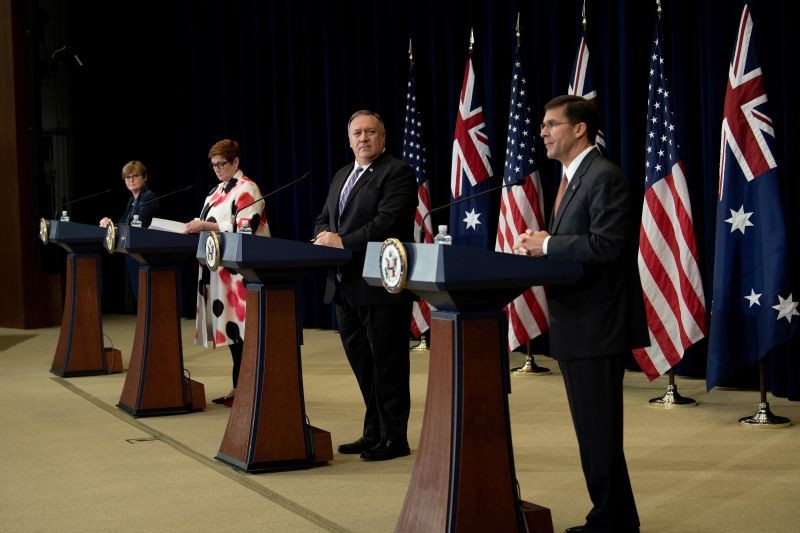 WASHINGTON, July 29 (Reuters): The United States and close ally Australia held high-level talks on China and agreed on the need to uphold a rules-based global order, but the Australian foreign minister stressed Canberra's relationship with Beijing was important and it had no intention of hurting it.

U.S. Secretary of State Mike Pompeo and Defense Secretary Mark Esper held two days of talks in Washington with their Australian counterparts, who had flown around the world for the meetings despite the COVID-19 pandemic and face two weeks of quarantine on their return.

At a joint news conference on Tuesday, Pompeo praised Australia for standing up to pressure from China and said Washington and Canberra would continue to work together to reassert the rule of law in the South China Sea, where China has been pressing its claims. That has led to friction with other countries in the region and concerns about freedom of navigation.

Australian Foreign Minister Marise Payne said the United States and Australia shared a commitment to the rule of law and had reiterated their commitment to hold countries to account for breaches, such as China's erosion of freedoms in Hong Kong.

She said the two sides had also agreed to form a working group to monitor and respond to harmful disinformation and would look at ways to expand cooperation on infectious diseases, including access to vaccines.

At the same time, she said Australia did not agree on everything with Beijing - or with the United States.

"The relationship that we have with China is important. And we have no intention of injuring it," she said. "But nor do we intend to do things that are contrary to our interests."

She said Australia and the United States had a shared interest in an Asia-Pacific region that was free, prosperous and secure and were broadly aligned on issues, including China.

Payne did not elaborate on disagreements with Washington, but said Australia made its own decisions and judgments based on its national interests and security.

"We deal with China in the same way. We have a strong economic engagement, other engagement, and it works in the interests of both countries."

Pompeo, a persistent and forceful critic of Beijing, said in a speech last week that Washington and its allies must use "more creative and assertive ways" to press China to change its ways and called it the "mission of our time."

Pompeo also said then it may be time for "a new grouping of like-minded nations, a new alliance of democracies" for this purpose.

Pompeo has been criticized by some for the speech, given the confrontational approach the Trump administration has taken towards some traditional allies, including in Europe, over issues such as trade.

Payne declined to comment on it specifically, but said, "the Secretary's speeches are his own, Australia's positions are our own," even if the countries operated on the basis of shared values.

Responding to a question, Pompeo rejected the suggestion that the administration's approach was unworkable.

"This isn't about picking America versus China," he said.

"This is about choosing freedom and democracy against tyranny and authoritarian regime, and I am confident that the democracies, our transatlantic Alliance ...know precisely, which side of that debate they want to be on."

While Washington is Australia's main security ally, China is its largest trading partner and Canberra has strained ties with the latter by pushing for an international inquiry into the spread of the coronavirus that first emerged in China.

Beijing has imposed dumping tariffs on barley from Australia, suspended some beef imports and warned students and tourists against traveling there, citing racism accusations.