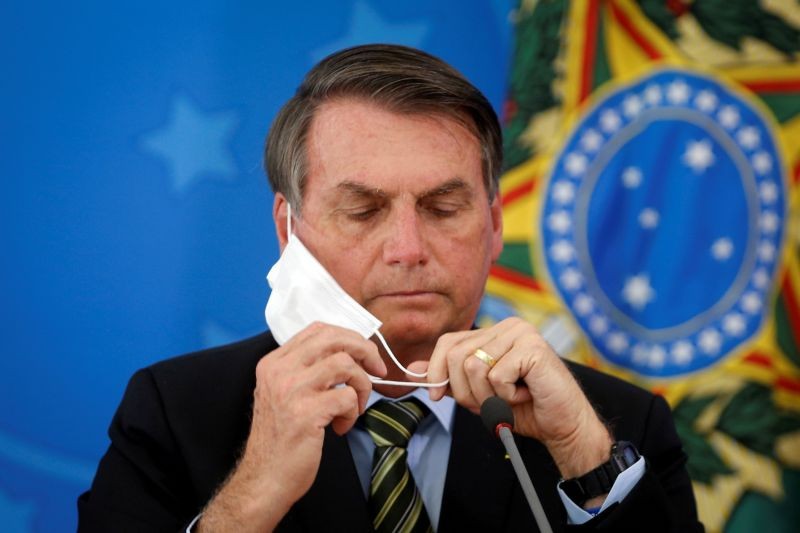 RIO DE JANEIRO, July 9 (Reuters): The Brazilian Press Association on Thursday filed a criminal complaint to the Supreme Court against President Jair Bolsonaro, after he took off his mask in a televised interview in which he announced he had tested positive for the novel coronavirus.

Bolsonaro made his announcement on Tuesday. His illness is a potent symbol of his government's botched response to the outbreak in Brazil, the second-worst in the world. More than 1.7 million people in Brazil have tested positive for coronavirus and nearly 68,000 have died.

Brazilian broadcasters pulled journalists off the job after they were exposed to Bolsonaro in the interview, quarantining them until they test negative for the disease.

In its complaint, the press association alleged that Bolsonaro had committed at least two crimes related to putting someone's life or health at imminent risk and failing to prevent the spread of an infectious disease.

The Brazilian Press Association, a prestigious professional group that advocates for journalism, asked that its complaint be sent to the attorney general's office to decide on whether there were grounds to proceed with a criminal probe.

Bolsonaro, 65, is currently in quarantine, and has said he is feeling well. The far-right former army captain has a prickly relationship with journalists, alleging unfair treatment and he is quick to label unfavorable coverage as fake news.

The president's office did not respond to a request for comment.

Facebook Inc on Wednesday suspended a network of social media accounts it said were used to spread divisive political messages online by aides to the president and two of his sons.

The allegations by Facebook add to a crisis in Brazil, where Bolsonaro's sons and supporters have been accused of running a coordinated online campaign to smear opponents.

The accusations have spurred a congressional inquiry and a separate Supreme Court investigation into attacks on the judiciary, which led to police raids in May on the homes and offices of Bolsonaro allies.

Bolsonaro, who is under mounting criticism over his handling of the coronavirus outbreak, has said the court's investigation is unconstitutional and risks establishing censorship in Brazil.