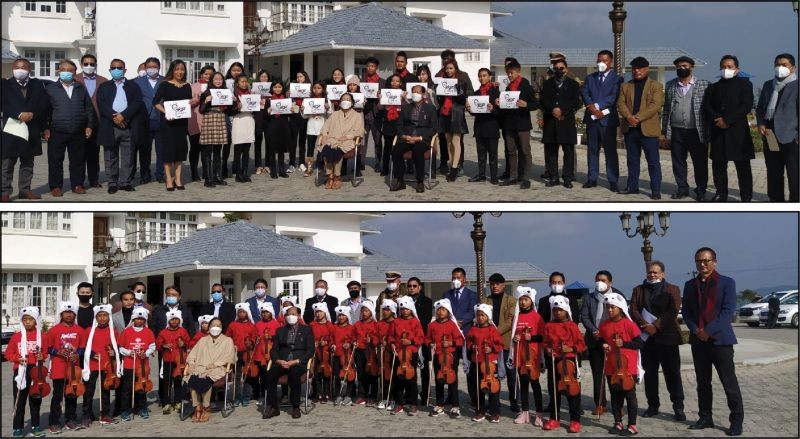 ‘Bright Lights’ comprising of 22 musically gifted children starting from the ages of 10 was formally launched today by the Chief Minister of Nagaland, Neiphiu Rio at his official residence.

An initiative of Task Force for Music and Arts (TaFMA), the children’s choir was mentored by accomplished pianist and musician, Bethel Tsuzu in the last couple of months.

The children, all of whom are regular singers and are performing constantly, staged a number of performances for the chief minister and his wife and other legislators and officials during the launch.

In the meantime, ‘Sunshine Orchestra’ Nagaland Chapter, that began under the aegis of AR Rahman Foundation also performed. Sunshine Orchestra is being mentored by Nourhevilie Khate, who embarked on the journey of playing the violin at the age of eight and has come a long way since.

In his brief address, CM of Nagaland, Neiphiu Rio congratulated both the groups and remarked that “it’s a wonderful time we had listening to your music and your songs.” Putting across that it is the dream of AR Rahman, who willingly accepted the invitation to attend the Hornbill Festival last year, he recalled that “one wish he wanted to do here was to set up an orchestra from the homes of underprivileged children and sponsor them so that they become a real national and international orchestras.”

In just a few months, he said the children have shown that they have talent. Rio further said that AR Rahman had seen that “Nagas and our people have so much talent and we only have to get the opportunity and the platform.” “I congratulate the Sunshine Orchestra and Bright Lights who sang to us and wish you all the very best,” he expressed.

He exuded hope that their talents will be used in the future to propagate the talent that the state has. “Me and my government are behind TaFMA and we are all supporting you…see that you make it to tell the story of the Nagaland state,” he also added.

In his welcome note, Advisor to TaFMA, Theja Meru thanked the chief minister for the love he has for young people and his keen interest in the promotion of creative arts and music. It has just been a few months, but he said Sunshine Orchestra has already started to take good steps towards fulfilling their dreams and aspirations. He also said that the newly formed children’s choir is something that TaFMA initiated during the lockdown. “This is something we have been doing during lockdown, and even if difficult, been practicing hard,” he said.