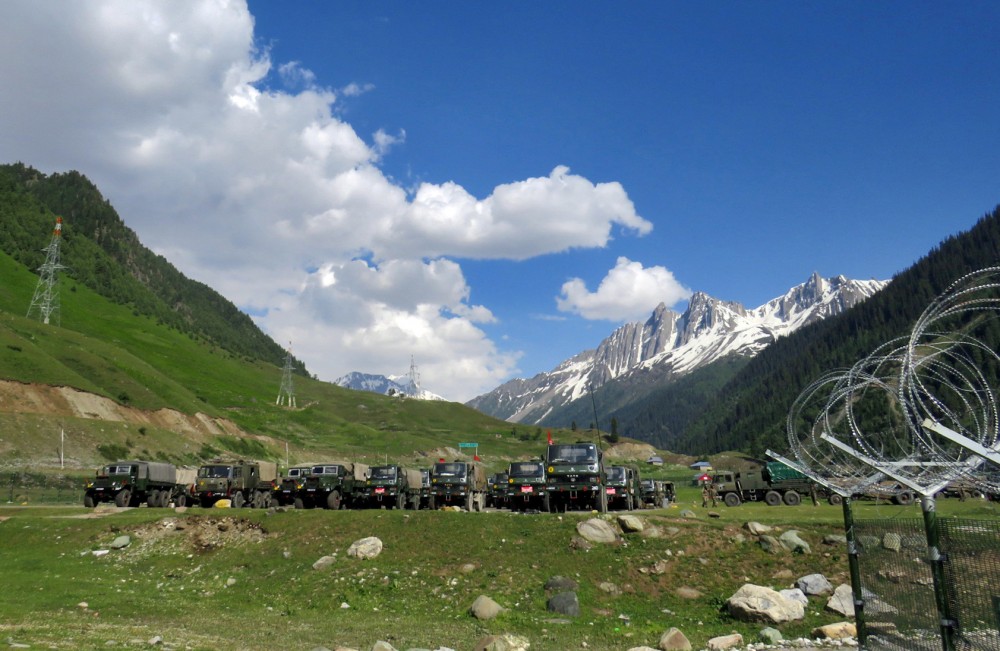 Indian army soldiers walk past their parked trucks at a makeshift transit camp before heading to Ladakh, near Baltal, southeast of Srinagar on June 16. (REUTERS/Stringer)
India
16th June 2020

June 16, New Delhi (IANS): India on Tuesday hit out at China for unilaterally attempting to change the status quo along the Line of Actual Control (LAC) in Eastern Ladakh, which led to the killings of troops of both the countries in a violent clash on Monday night.

The Ministry of External Affairs' official spokesperson Anurag Srivastava said that on Monday late-evening, a violent face-off erupted between the two sides because of "an attempt by the Chinese side to unilaterally change the status quo" in the Galwan Valley in Ladakh.

"Both sides suffered casualties that could have been avoided had the agreement at the higher level been scrupulously followed by the Chinese side," Srivastava said.

He was responding to media queries on the situation in the western sector of the India-China border. India and China, the spokesperson said, have been discussing through military and diplomatic channels the de-escalation of the situation in Eastern Ladakh.

Senior Commanders had a productive meeting on June 6 and agreed on a process for such de-escalation. Subsequently, ground commanders had a series of meetings to implement the consensus reached at the higher level.

"While it was our expectation that this would unfold smoothly, the Chinese side departed from the consensus to respect the Line of Actual Control (LAC) in the Galwan Valley," the government spokesperson said.

India, he said, is known for its responsible approach to border management and has been very clear that all its activities are always within the Indian side of the LAC. "We expect the same from the Chinese side," he said.

The government, he said, remains firmly convinced of the need for the maintenance of peace and tranquillity in the border areas and the resolution of differences through dialogue. At the same time, the government is also "strongly committed to ensuring India's sovereignty and territorial integrity," he said.

Three Indian Army men, including an officer, were killed on Monday night during a violent face-off with Chinese People's Liberation Army troops in Galwan Valley. An Indian Army Colonel, the Commanding Officer of an infantry battalion, and two soldiers were killed in the clash at one of the stand-off points in the Galwan Valley.