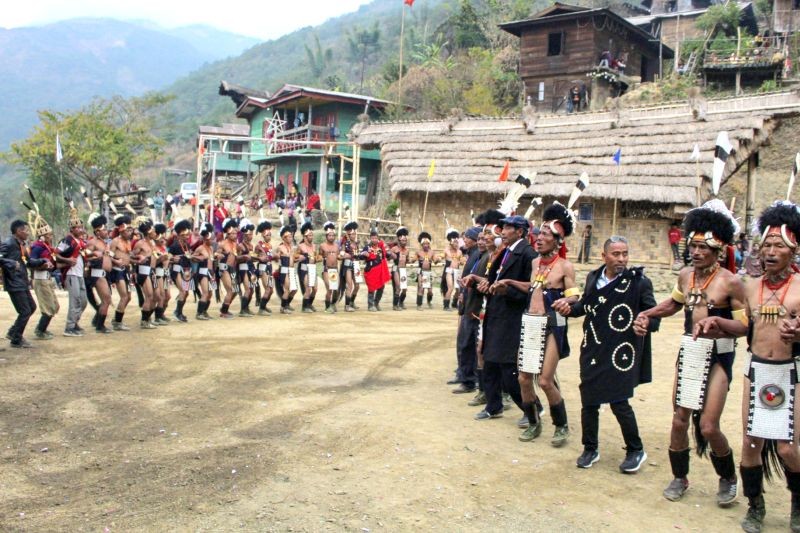 Addressing the gathering, chief guest H Zungkum Chang, a former candidate and Central Executive Council Member of Nationalist Democratic Progressive Party (NDPP) Nagaland, spoke on the need for the community to be self sufficient.

He posed a challenge before the community to individually reflect on what each person has contributed for the welfare of their family, their children and grandchildren, for the village, the church, and the people. “Are we still dependent on others or are we self sufficient and even to the extent of helping others? Let us ponder over it,” he stated.

He further encouraged the gathering to be builders of society while adding that, only hardworking people will achieve things, and a lazy person will never succeed either in his work or education.

“We are all made equal by God but only those who work hard and put behind their problems will achieve in life. So, dear sons and daughters work hard in your studies because you are an important aspect in making your village community better,” he added.

He further emphasised on the need for continuity of traditions and acknowledged the festival host and his family while invoking God’s blessings on them.

The festival was sponsored by E Nasethongsa of Chendang village and his family.

In the Poang Lüm festival programme, Chendang Village Council Chairman BM Sipong delivered a brief speech which was followed by presentation of the guests.

Somba, Village Council Chairman of Chendang Saddle while appreciating the effort to host the Poang Lüm celebration, said that this festival should not end only with dancing and merry making but also be a time to forgive one another.

B Yanu President, Chendang Citizens’ Union also addressed the gathering stating that, “Traditional dance form is one of the most beautiful gifts from God to our people. However, we must learn to adapt our cultural values in our present context by valuing the modern education as well.”’

He further stated that this festival is celebrated every year so that it leaves an impact on the younger generation. It also serves as a means to impart cultural values and ethics of the ancestors, he added.

The sponsor of the fest, E Nasethongsa narrated that his father and grandfathers hosted such festivals with pomp and gaiety in the past and therefore he felt that it was his duty to continue their legacy. However, he also mentioned that it not a contest of sponsoring the festival but to keep the tradition of their people alive.

“I have hosted this for our people so that there is unity and coherent existence among us. Our dance should signify that,” he added.

He further extended his appreciation to the Chendang Village Cultural troupe who would be performing throughout the day.

Sparkle Club of Chendang Saddle comprised of young girls performed a fusion of tradition and modern choreography while Lole Wet Band, a well known Chang band performed an original song in honour of the festival and the chief guest.