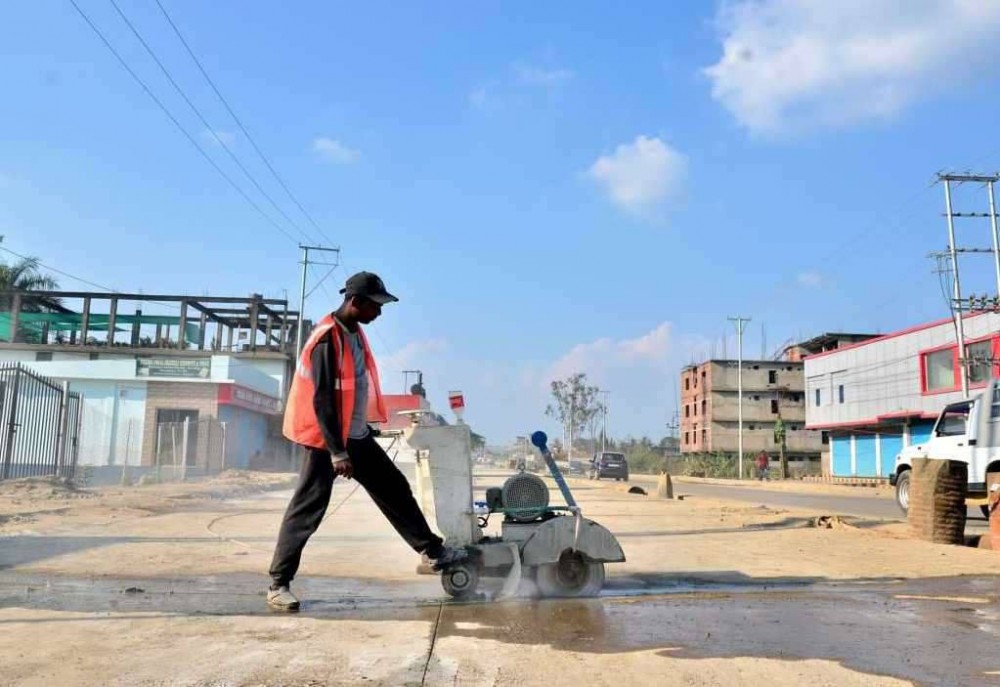 Representative Image: A worker uses a machine at the ongoing construction works along NH-29, Purana Bazar-Chümoukidima sector. The steady departure of migrant workers to their respective states has created a void in the construction sector in Nagaland. (Morung File Photo)
Morung Exclusive
30th May 2020

Following an advertisement published in the local daily newspapers inviting ‘skilled and unskilled labourers’ for construction (bridge) works at Sanourü Bridge at Secretariat road, Kohima, The Morung Express contacted Adu Venuh who is in-charge of the construction works.

Venuh informed that there is shortage of workers as some of migrant workers have left for their respective states and that the work cannot cease. About 50 calls were received, out of which 45 calls were from local youths who have expressed their desire to work, he added.

Venuh also maintained that they wanted to give this opportunity to the local youths, who can fill in the vacancies and also learn the know-how of construction works.

Not long ago, YouthNet trained hundreds of local youths in construction works with the aim to impart skill training for employability of the youths.

YouthNet Director Lezo Putsure informed that about 550 youths were trained where 250 trainees are active. However, he pointed out that it is a big challenge now as the trainees who are from various parts of the state have all gone back to their respective villages.

He stated that the trainees are ‘proficient and skilled’ and employable in the construction sector and added that this pandemic is a big opportunity for any Naga to fill the gap which has been left by the migrant workers.

“Unemployment is just a mental thought process. There are two ways - we can either sit at home and complain and do nothing, or we can fill the gap which has been left because of the migrants workers” Putsure pointed out.

Nagaland is synonymous with the term ‘educated unemployed’ with thousands of registered educated unemployed in the state. Conversely, the state has the highest number of government employees where 80% of the budget is being spent on salaries.

With the rise of unemployment, there have been debates and discourses wherein many leaders and intellectuals have suggested the need to change the educational system – from textbook knowledge to hands-on skill knowledge for the students and youth to be employable in various sectors.

In the present scenario and in the absence of the migrant workforce, a concerned citizen and public leader also opined that “the vacuum created by the migrant workers will be an opportunity, provided our people have the will to work.”

And now with the pandemic, there is an urgent need to be self-reliant in all aspect, which was also emphasised by the state government of being self-reliant, especially in agri and allied sector by going back to our roots.