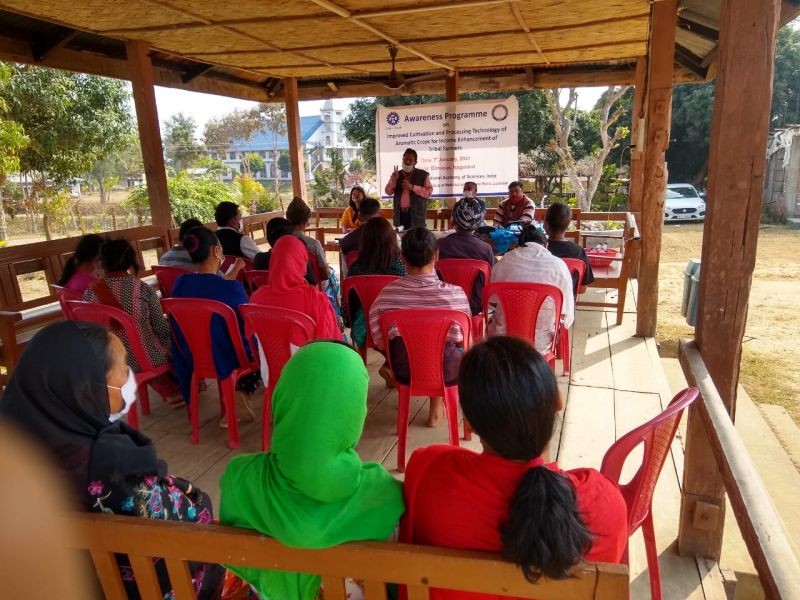 The programme held at Lhothavi Village in Dimapur was well attended by farmer groups and SHGs of the area, stated a press release received here.

Addressing the gathering as the keynote speaker, Dr Israr Ali, Consultant at CSIR-CIMAP spoke about the potential of certain medicinal and aromatic plants which can be successfully grown and cultivated in the area as well as in Nagaland.

He went on to elucidate on the importance of tapping into the agricultural sector to create a sustained livelihood which will not only enhance one’s income but also contribute to the overall economy of the state. He encouraged the attendees to work towards finding and establishing market linkages for their products.

Later, a feedback and query session was conducted which saw concerned individuals sharing their views and putting forward questions related to their field of cultivation. Earlier, the programme opened with a brief introduction by Manoj Kumar Yadav, Technical Officer, CSIR-CIMAP.

The CIMAP team was headed by Dr Israr Ali, Mohan Kumar Yadav and Vipin Kumar with Toka MPCS Ltd as the state collaborator.

The programme was followed by demonstration at the field site which consists of lemongrass plantations and a distillation unit set up through the assistance of CIMAP with Toka MPCS Ltd being the implementing agency.

CIMAP is steering multidisciplinary high quality research in biological and chemical sciences and extending technologies and services to the farmers and entrepreneurs of medicinal and aromatic plants (MAPs) with its research headquarter at Lucknow and Research Centers at Bangalore, Hyderabad, Pantnagar and Purara.

CIMAP Research Centres are aptly situated in different agro-climatic zones of the country to facilitate multi-location field trials and research.