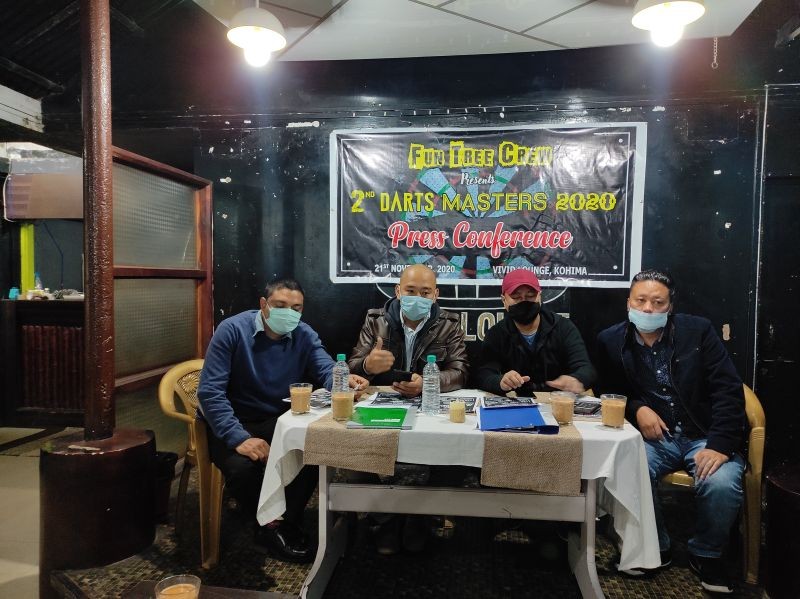 The second edition of Darts Master 2020 will be held on December 12, at Vivid Lounge, PR Hill Junction Kohima, announced the Fun Tree Crew (FTC) team today during a press conference.

FTC is the founder of the Darts Master championship with the first edition held last year. "After the successful 1st edition at Machaki in 2019, the second edition is expected to be bigger and grander, giving opportunity and platform to the young darters. The competition is organised with an aim to promote the sport and also identify potential darters who will later be able to participate in the national level representing the state and hopefully participate at the international level," said Thejakhrietuo Kire, Event Director speaking to media persons on November 21 at Vivid Lounge, Kohima.

Due to the COVID 19 scenario, the event will be exclusively for the organizers and participants without any spectators. However, the event will be streamed live online via Facebook. Following all Standard Operating Protocols (SOPs), thermal scanning, wearing of masks and sanitizing of hands will be made mandatory.

"There are 32 slots and the competition is open for all. With increasing participants, the prize money have also increased," said the FTC team informing that the overall prize pool is Rs 70,000. The first prize carries a cash award of Rs 15,000, the second carries a prize of Rs 10,000 while there will be a joint third where the two winners will be awarded Rs 5000 each along with certificates. There will also be special awards for the highest score, highest checkout, best leg and most promising player which carries a prize of Rs 3000 each with certificates.

Participants will be grouped in four with eight participants each in the groups with the first round to be played on league basis. The top two will qualify directly to the quarter finals.

Interested participants can register online or offline in mentioned outlets at Vivid lounge and Zumvu printex. The registration is priced at Rs 1500. The last date of registration is December 5.

The team also announced that the Darts Master will be an annual event.

FTC was established in 2018 as a 'non-political and nonprofit' organisation to promote social events and sports, 'to foster and encourage the spirit of oneness'. Its vision is to provide an environment of trust, to inspire and create an impact in people's lives.

During the press conference, the FTC Team also announced that its member Vikehelie Suohu has been selected for the JDC Virtual Amateur World Darts Championship organised by the Junior Darts Corporation to be held in Gibraltar from April 7 to 13.

Players who have successfully gained 6 passports will also be able to enter the soft tip tournament in April by virtue of obtaining their 6 passports.

An employee at the Nagaland Board of School Education, Suohu hopes to open a darts coaching center at home for children below the age of fifteen, in future. Starting early, according to Suohu is very essential in any sport including Darts where he also pointed out that in national events, there is hardly any representation of Nagas in the younger category.