‘Desify’ opens at No.1 on iTunes India Chart 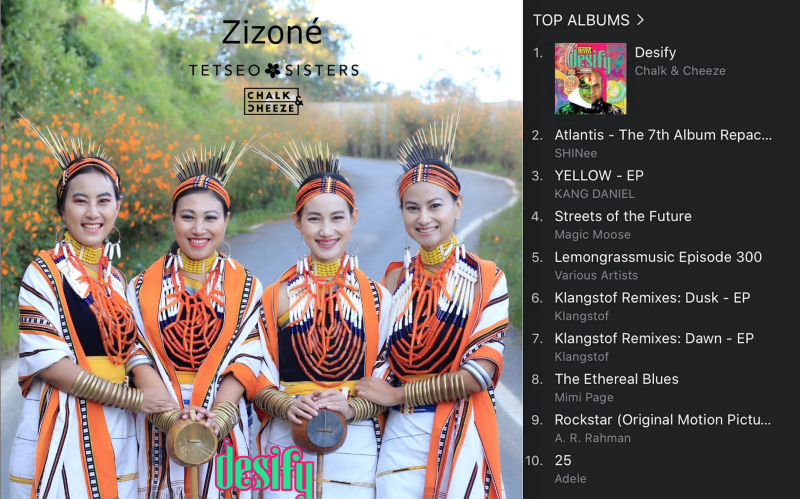 Sandeep Chowta and Namma Music present the latest electronic dance music project from Chalk & Cheeze - “Desify” which opened at No.1 on the iTunes India chart.

The album also features one of the country’s finest folk music groups, from Nagaland - Tetseo Sisters on a track “Zizoné” & a fresh DJ/producer in the block El.Khefe (Harshit Chachra).

Zizoné is a song in Chokri Naga, about the mysterious beauty of all women. Beautiful creatures who seem fragile but surprises you with their strength and dexterity. The sisters attribute the title to one of the members Azi, whose pet name as a child, is Zizoné and literally means “calm goodness”.

Chalk & Cheese is a DJ/Producer duo based out of Bangalore and they describe themselves as “Chapman of deep, infectious dance grooves and a feel-good atmosphere.” This album was created when Sandeep Chowta and Nitish Chachra distilled down their collective experiences and decided to fuse an Indian sound and vibe with their favourite house music beats and arrived at Desify.

Chalk & Cheeze grew up with quite a mixed spectrum of musical influences. Today, this translates into DJ sets where they pick apart and infuse together all the pieces of music they love best: beautiful synth work, ethereal backdrops, brooding basslines, and occasional vocal hooks… all on top of a pronounced foot-shuffling beat. As producers and music promoters, they have found plenty of ways to express themselves musically.

“For us, it’s all about the mood and a deep, hypnotic groove… playing those tracks that get you tapping your feet and nodding your head without you realizing it, regardless of genre, tempo, or style,” stated Chalk & Cheeze, Bangalore.

The Album is mixed & mastered by Vikram Ghatpande with Cover Design/Album Art By Smitten Worldwide. Desify is out on all digital streaming platforms on April 14, 2021.

"We'd never thought that a chance meeting 4 years ago, with respected film music composer Sandeep Chowta, would bring us together to release his indie label Namma Music’s first foray into the Electronic Dance/House music genre in 2020 and here is the second album,” according to - Chalk & Cheeze.

Combining musical influences from the West, with sounds and experiences from all our travel across India, we loved the journey of blending Indian instruments from various regions with our favourite house beats and creating Desi House music.

Collaborating with Tetseo Sisters, one of the finest folk music groups from Nagaland, has been an exciting addition to this album, stated Chalk & Cheeze.