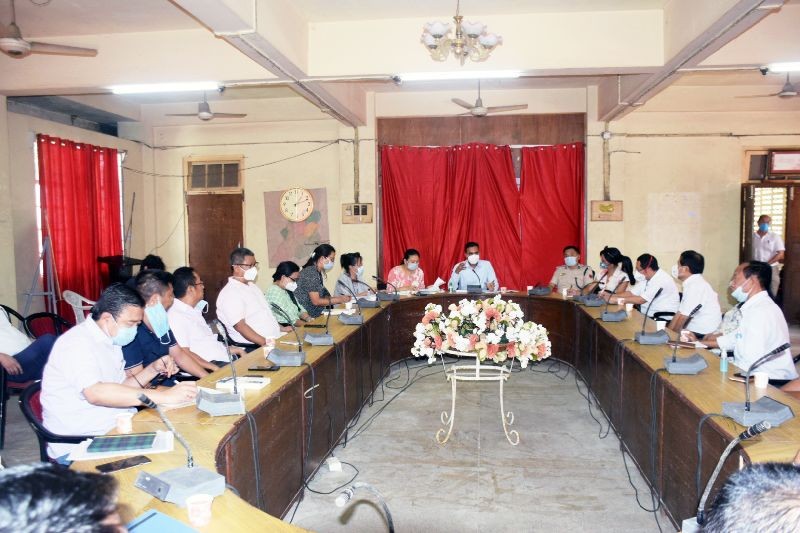 Dimapur, August 7 (MExN): The Dimapur District Task Force (DTF) headed by the new Deputy Commissioner (DC) Rajesh Soundararajan deliberated on a ‘calibrated reopening’ of the district in the DTF meeting held on August 7.

The DC asserted that calibrated reopening will be chalked out as per the suggestions of the members. He directed DMC administrator for forming a sub-committee under his convernorship and for chalking out a plan best suited in the local context.  The sub-committee will put up a proposal of calibrated reopening of the markets and put it up to the DTF.

This was the first DTF meeting convened and chaired by Soundararajan after taking over as DC Dimapur, a DIPR report stated.

In the meeting, the DC welcomed all the Dimapur DTF members and also thanked them for their attendance. He explained and highlighted on the latest SOPs issued by Government of Nagaland on August 4 and 5.

While urging the members to avoid unnecessary panic, the DC also asked them to take all required precautions. He advised the members to sensitize the people so that issues of stigma and discrimination are avoided.

Commissioner of Police Dimapur, Rothihu Tetseo reminded that DTF Dimapur was the highest governing body of the district and urged the members to work as a team. He further expressed that there was no harm in appreciating the medical, administration, police and frontliners at times.

MS Dimapur, Dr Kuveduyi Theyo, said that the present SOP has been framed very wisely and observed that workload of medical personnel would be lighter as far as COVID-19 was concerned, and expressed that the hospitals would be able to prioritize the emergency cases.

In surveillance work, anyone from non medical background can also help, she added. The CMO asserted that COVID-19 is not only a medical problem but a collective problem and said that civil societies have a big role in it.

Clarifying the apprehension of some CSOs members, Deputy CMO, Dr Antoly informed that although initially the COVID-19 positive cases of paramilitary forces were housed in the COVID Hospital Dimapur, presently there are no security personnel in District Hospital Dimapur since the past one month as they have all been shifted to their own centers.

Director CISHR, Dr Sedevi opined that dead bodies need not be tested for ascertaining COVID status, mentioning that it was just wastage of time, the report added. He also suggested providing TrueNat to all the private hospitals, through PPP mode by signing an MOU.

In this regard, DC Dimapur said that he would discuss with the Medical Department and take it up with the Government.
In the meeting, many expressed concern on the issue of harassment and barring of medical personnel and other frontline workers in their colonies/villages. The issue of lifting the lockdown at Dimapur was also suggested by several members.

The DC  thanked the members for the inputs and suggestions and informed that follow up action would be initiated by convening a meeting at the earliest.