Finding the way back home amidst COVID-19 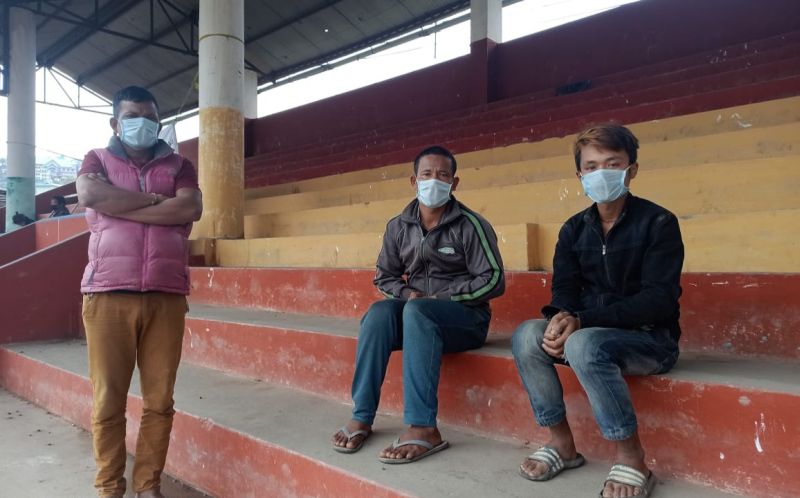 Some of the migrants who are sheltered at the relief camp at Khuochiezie, Kohima Local ground. At present, the relief camp in Kohima is providing accommodation to 12 migrant workers. (Morung Photo).

It is no laughing matter. However, Muniram couldn’t help it, recollecting a failed attempt he undertook with seven others, to reach their hometown Diphu, in Karbi Anglong Assam, by foot with no shoes but only slippers.

"We were hoping the lockdown will end on April 14. We were told that the trains might start running, so we tried to journey to Dimapur by foot. We thought we might find the way to Dimapur if we follow the river near High School," narrated the migrant worker from Assam.

Out of work and money, and with transportation links restricted, he and seven migrant workers from his hometown attempted to follow the river at Sanuorü Bridge in Kohima to reach Dimapur.

The group wandered for three days until they realised they were completely lost.

"We slept on a hill one night. Another night we made a makeshift shelter, and the next we took shelter in resting shed in the fields. We were bitten by leeches. We carried three kilos of rice and two kilo dal for our journey which we cooked in the forest. We only had a handful to eat. We also foraged some forest herbs and leaves and ate it with the rice,”recollected another from the group.

“We crossed some unknown villages too but we couldn't exactly locate the way to Dimapur," he said adding that he tried using Google Map from his phone to locate the route to Dimapur.

The group finally gave up after three days and contacted a police personnel known to them, who in turn advised them to return back to Kohima.

"We returned back from the same route. The policeman informed the Kohima police here who came and rescued us from High School," informedMuniram.

The group of eight are now taking shelter at the relief camp at Khuochiezie, Kohima Local ground set up by the Kohima District Administration and the District Disaster Management Authority Kohima.

"We have cuts and wounds from the journey as we were only wearing slippers. But we are happy that we have a shelter now. We feel safe," Muniram added.

Not lone incident
"I've been taking shelter from the relief camp for three days now," said M Basumatary, another migrant worker from Golaghat.

Basumatary was among the 45 migrant workers who attempted to walk all the way to Assam from Kohima when they were picked up at the National Highway- 29 Kohima Check post and sent back to their respective accommodation in Kohima.
"I heard the news that the lockdown might end and movement will begin by April 15. So I joined some of them and attempted to walk," he informed.

While the rest were residing in different colonies in Kohima in rented homes, Basumatary, who works in a village near Kohima, had to seek the relief camp due to restrictions on entry of outsiders in view of the present pandemic.

"I took shelter in the police station for one night, and they finally brought me here at the relief camp," he added.
"The relief camp is so much comfortable than the nights we spent in the forest," remarkedMuniram adding that at the relief camp they are being provided essential amenities such as rice, dal, potato, soap, water, tea and firewood to cook, as well as mattresses and blankets.

Like the rest of the country, the vulnerable population of migrant workers in Kohima too are undergoing hardships.
At present, the relief camp in Kohima is providing succour and accommodation to 12 migrant workers.