FM hits out at opposition for politicising GST compensation issue 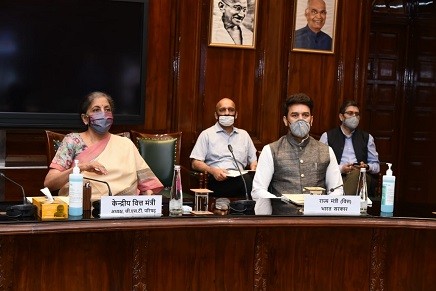 NEW DELHI, AUGUST 27 (IANS): Union Finance Minister Nirmala Sitharaman on Thursday hit back at the opposition for "unnecessarily trying to politicise" the GST compensation issue when their previous government was to be blamed for "building an environment of mistrust" between the Centre and states.

Reacting to charges that several states, particularly those ruled by the opposition, were blaming the Centre on going back on its commitment to pay GST compensation to states, she contended that it was the former government, which did not keep its promise on Central Sales Tax (CST) compensation issue that created an atmosphere of mistrust.

This mistrust, she said, initially even affected GST implementation.

"But I am grateful to states that there was no attempt to politicise the compensation issue at the Council's meeting today. There were just worries about the current situation and an anxiety to find a solution to the compensation problem," Sitharaman said, after coming out from five-hour-long meeting of the GST Council on the sole issue of GST compensation.

Some states have blamed the Centre for shying away from its constitutional obligation to pay GST compensation to states.

In a hard-hitting letter to Sitharaman on Wednesday, West Bengal Finance Minister Amit Mitra wrote: "It appears that our worst fears are now coming true. It is surprising that the constitutional guarantee given to the states is being interpreted in a manner that the Centre is not responsible to compensate the states and it is the states (in the GST Council) which will have to find means to compensate themselves." At the 41st meeting of GST Council, it was decided that states would come with their views on two options to meet GST compensation as proposed by the Centre. This would help in operationalising the scheme this year to meet additional expenditure needs of the states who are also facing severe shortages in revenue collections due to Covid disruptions.