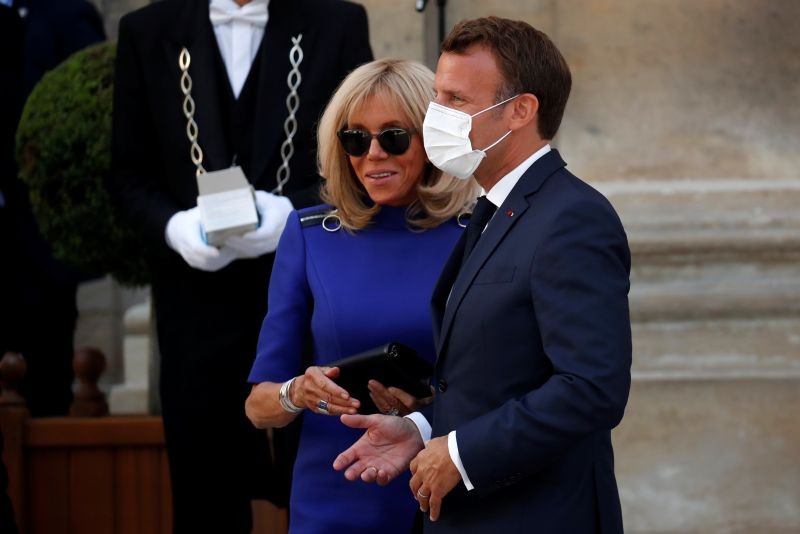 French President Emmanuel Macron wears a protective face mask as he leaves with his wife Brigitte after giving a speech to the French Military Forces at the Hotel de Brienne in Paris, France on July 13, 2020. (REUTERS Photo)

PARIS, July 14 (Reuters): France will in the next few weeks make it compulsory to for people to wear masks in shops and other enclosed public spaces to stop a resurgence of the COVID-19 outbreak, President Emmanuel Macron said on Tuesday.

The virus, which killed more than 30,000 people in France, has been on the decline, but Macron said it was spreading again in some places as France opens up beaches, bars and restaurants after a two-month lockdown.

"We have some signs that it's coming back a bit," Macron said in an interview with French broadcasters. "Faced with that, we must anticipate and prepare.

"I want us, in the next few weeks, to make masks compulsory in enclosed public places.

"I ask fellow citizens to wear masks as much as possible when they are outside, and especially so when they are in an enclosed space," Macron said.

Up to now, France has required people to wear face coverings on public transport and in public spaces where social distancing is not possible, but has not mandated the wearing of masks in shops.

Macron, speaking on the Bastille Day national holiday, also said he wanted COVID-19 testing available for everyone, without having to be referred by a doctor.

The biggest challenge France faced in the next six months was an expected wave of joblessness as firms hit by the epidemic lay off workers, he said.

He also said he was working with his government to ease the impact, especially on young people emerging into the workforce this summer after they finished their studies.