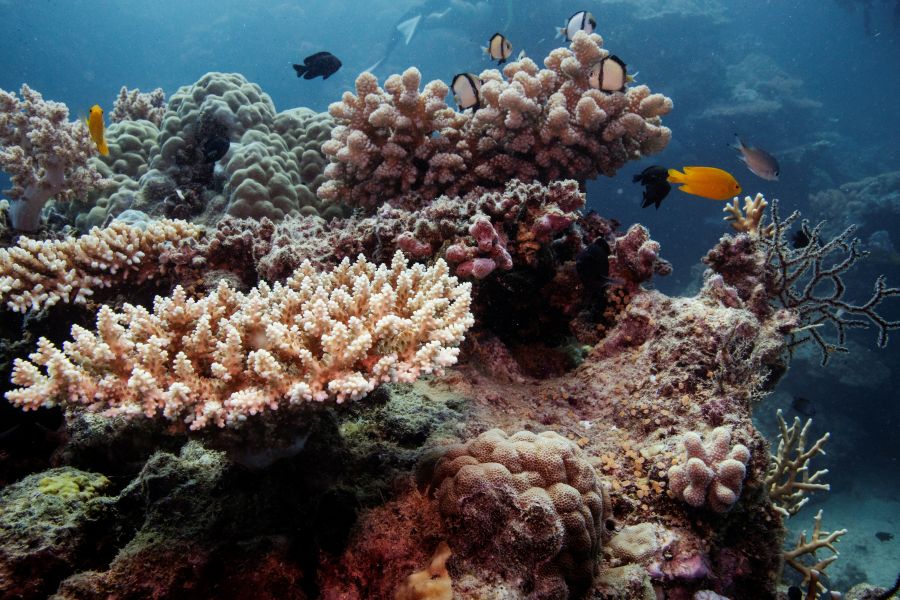 Reef fish swim above recovering coral colonies on the Great Barrier Reef off the coast of Cairns, Australia on October 25, 2019. (REUTERS File Photo)

ROME, February 27 (Thomson Reuters Foundation): Governments are under pressure this year to agree on protecting at least 30% of the planet's land and seas by 2030, not only to conserve endangered species and ensure food and water supplies, but also to help regulate an increasingly erratic climate.

This week in Rome, negotiations are underway on a new global framework to safeguard the Earth's ecosystems and biodiversity, which is due to be finalised at an October conference in China.

The proposed goal to put about a third of land and oceans under some form of protection, such as by expanding national parks, is the centrepiece of a draft text outlining 20 targets.

Those include reducing pollution from plastics and other waste by half, and restoring freshwater and marine ecosystems.

The new targets would replace an earlier set that expire this year, most of which have been missed.

Green groups and U.N. agencies have dubbed 2020 a "super year" for biodiversity due to opportunities - via the new pact and a U.N. "Nature Summit" in September, among others - to halt and reverse shocking declines in animal and plant species.

"Key decisions throughout this year will have direct implications for our life and the life of the living beings we share our planet with," said Anne Larigauderie, executive secretary of the Intergovernmental Science-Policy Platform on Biodiversity and Ecosystem Services (IPBES).

Grouping 130 countries, IPBES warned in a flagship report last year that up to 1 million animal and plant species out of an estimated 8 million were at risk of extinction, particularly due to industrial farming and fishing.

The potential losses include medicinal plants and insects vital for pollinating food crops, as well as the destruction of coral reefs that support fish populations.

NO PROFIT ON A DEAD PLANET

Environmentalists are now urging governments to adopt ambitious targets for 2030 and 2050 under the U.N. Convention on Biological Diversity (CBD) at its October conference, to save species and their habitats in the next 30 years.

Marco Lambertini, director general of conservation group WWF International, said today's ecological challenges were "not just about protecting pandas and tigers and elephants... but about undermining the systems that support our own well-being".

Protecting ecosystems like wetlands and forests would also help absorb planet-heating gases such as carbon dioxide from the atmosphere and address climate change, for example.

The alarm bell in the IPBES report over the current rate of species extinction has coincided with growing public activism over the environment and climate change, boosted by the student protests sparked by Swedish teenager Greta Thunberg.

Lambertini said the convergence of scientific data, broader awareness and key policy events made 2020 a "super year for biodiversity", a term WWF coined two years ago.

Eva Zabey, executive director of Business for Nature, a coalition whose advisory group includes Unilever, Danone, H&M and Walmart, said the past year had seen "a real shift", with companies recognising the importance of protecting biodiversity.

"One of the key messages we have is that financial performance is irrelevant on a dead planet," she said.

Underlining this shift, the World Economic Forum's annual risk report last month found decision-makers' top five concerns were all linked to the environment for the first time, including biodiversity loss.

At this week's meeting in Rome, hastily relocated from China due to the coronavirus outbreak, nearly 1,000 delegates from 142 countries are negotiating the draft of the new CBD framework.

It needs to become more ambitious and set clearer goals, deadlines and responsibilities, some attendees said.

Green groups said it lacks an overarching goal like the 2015 Paris Agreement on climate change which pledged to limit global temperature rise to "well below" 2 degrees Celsius (3.6F) above pre-industrial levels.

"The clarity, the North Star, is not there, and the mission is good but it's still not that measurable," said WWF's Lambertini.

Peter White of the World Business Council for Sustainable Development, whose 200 members include major household brands, said the CBD goals should be linked to the U.N. climate talks because climate change and nature loss are interconnected.

The private sector needs political leaders to set ambitious targets in the CBD agreement to steer businesses and encourage more companies to come on board, he added.

Business for Nature has proposed reforming incentives and subsidies so that nature protection is rewarded financially.

Brian O'Donnell, director of the U.S.-based Campaign for Nature, said scientists had recommended the 30% land and oceans protection target to be raised closer to 50% in order to keep ecosystems functioning and maintain at least 85% of species.

The rights of indigenous people should also be embedded in all the new CBD targets, he added.

The biodiversity talks are crucial because the goals they set will guide other nature-related international conventions including on migratory species, the trade in endangered species and wetlands, analysts said.

The discussions could also resolve an issue that has put developing and developed countries at loggerheads: how to share benefits from genetic plant data that could help breed crops better able to withstand climate change.

Disagreement over "digital sequence information" (DSI) has been a sticking point in efforts to update what is known as The Seed Treaty, whose objectives are similar to the CBD's.

Elizabeth Maruma Mrema, acting CBD executive secretary, said it was crucial for the CBD negotiations to secure an agreement this year.

"We've seen there might be no life beyond this century if we're not careful," she told journalists before the Rome talks.

Campaign for Nature's O'Donnell urged the world to "err on the side of boldness and ambition".

"We will never regret that we safeguarded too much of the planet... that our climate is more stable than it was," he said.