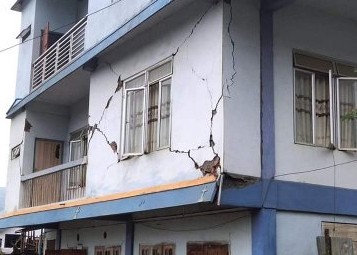 A house partially damaged by earthquake is seen in this picture shared on Twitter by the Mizoram Chief Minister Zoramthanga on June 22. (Photo: @ZoramthangaCM / Twitter)

New Delhi, June 22 (PTI): An earthquake of 5.3 magnitude hit Mizoram in the early hours of Monday, causing damage to houses and cracks on roads at several places, an official said.

No casualties have been reported, the official of the state Geology and Mineral Resource Department said.

Quoting the National Centre for Seismology, the official said the earthquake happened at 4.10 am and the epicentre was at Zokhawthar in Champhai district on the India-Myanmar border.

The tremors were felt in several parts of the state, including state capital Aizawl, he said.

Several houses and buildings, including a church at Zokhawthar in Khawbunga, in Champhai district have been partly damaged due to the quake, he said.

The quake also caused cracks on highways and roads at several places, he added.

The full extent of the damage is yet to be ascertained, the official said.

Prime Minister Narendra Modi assured Mizoram Chief Minister Zoramthanga of all possible support from the Centre after the earthquake hit the northeastern state.

"Spoke to the Chief Minister of Mizoram, Shri Zoramthanga Ji, on the situation in the wake of the earthquake there. Assured all possible support from the Centre," the prime minister tweeted.

Union Home Minister Amit Shah too spoke to Mizoram Chief Minister Zoramthanga and took stock of the situation in the northeastern state after it was jolted by an earthquake.

The home minister also assured the chief minister of all possible help from the central government to deal with the situation.

"I have spoken to Shri @ZoramthangaCM ji, Chief Minister of Mizoram, to review the situation after the earthquake tremors in the state. I assured him all possible support from the central government. Praying for everyone's safety and well-being," Shah tweeted.