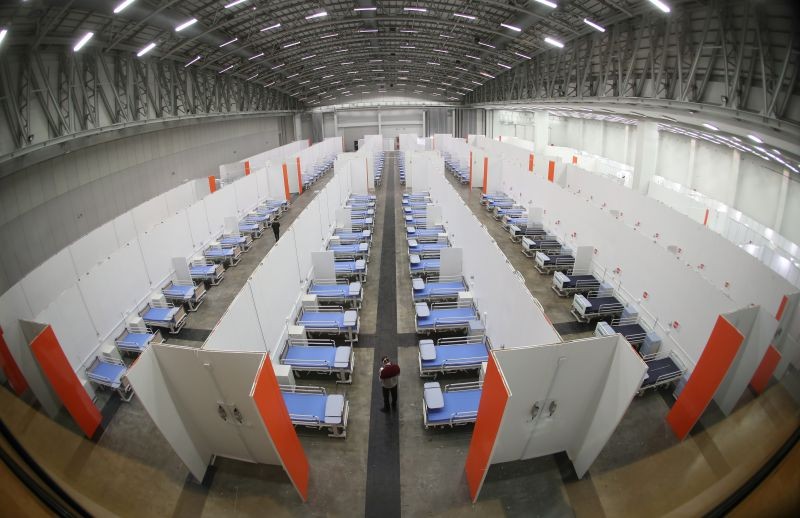 A health department official walks past beds set up at a temporary field hospital to deal with an expected surge in cases of the coronavirus disease (COVID-19) at the Cape Town International Convention Centre in Cape Town, South Africa on May 26, 2020. (REUTERS File Photo)
World
31st July 2020

They can't keep up. Video filmed inside the hospital and seen by Reuters shows patients with COVID-19, the disease caused by the new coronavirus, being treated in a general ward, separated from other patients only by curtains.

"There's no space anywhere," nurse Rich Sicina said outside the modernist, iron-roofed hospital in a southern Johannesburg township. "It's a mess."

Kwara Kekana, spokeswoman for the department of health in Gauteng, the province containing Johannesburg, said that at the beginning of the pandemic, Thelle Mogoerane Hospital had dedicated wards for patients under investigation.

"Once we had a first positive case, a ward was created for confirmed positive cases," she said, adding that it strictly followed South Africa's national infection prevention guidelines.

The struggle is what President Cyril Ramaphosa wanted to avoid when he imposed one of the world's toughest lockdowns in late March - when the country had confirmed just 400 cases - to buy health workers time to prepare.

But the measures battered the economy of Africa's most industrialised nation, which was in recession before the pandemic, and Ramaphosa lifted many of them long before infections peaked in order to save livelihoods.

Four months later, South Africa faces a runaway epidemic that has overwhelmed public hospitals in a country where roughly half the population lives below the poverty line, according to the latest government figures from 2015.

With the number of cases approaching 500,000 - more than half of Africa's total and the world's fifth-highest - the country's harsh inequalities appear to have contributed to its undoing, government advisers and independent experts said.

The first cases were wealthy travellers who brought the virus in from Europe, Asia and beyond, they said.

"They could isolate in their mansions," said Wolfgang Preiser, a virologist at Stellenbosch University. "The problem is that these places are maintained by a whole crowd of domestic workers. They were exposed, and they travelled home in (communal) taxis."

It overwhelmed public hospitals "already on the brink of collapse".

Police and soldiers battled to enforce the lockdown in areas where people live in close quarters and depend on daily earnings to eat. Bustling markets in Soweto, Johannesburg's biggest township, were a stark contrast to nearly deserted streets in the city's more affluent suburbs.

Mismanagement and looting of public funds, which have hollowed out public services for years, exacerbated shortages of protective clothing and other supplies at some hospitals, according to both the government and its critics.

Ramaphosa pledged a crackdown, saying on July 23 that authorities were investigating at least 36 corruption allegations in areas including COVID-19 procurement and relief programs.

Other factors were less foreseeable: some epidemiologists think the virus was circulating before it was first detected in the eastern KwaZulu-Natal province in early March, including across the country in the tourist hotspot of Western Cape.

"I understand people might ask if things could have been done better, but honestly, what more could we have done?" Moosa said.

"If we had a magic wand we could wave and turn our healthcare system into a world-class one overnight, then we would have done it."

The World Health Organization says South Africa is a "wake-up call" for other African nations, where confirmed infections are lower but climbing.

"South Africa may unfortunately be a precursor, ... a warning for what will happen in the rest of Africa," the WHO's top emergencies expert Mike Ryan said.

FROM RICHES TO RAGS

The first cases identified in Johannesburg, the country's biggest city now at the outbreak's epicentre, were concentrated in Sandton, a wealthy northern suburb.

Provincial officials declined to release case figures for specific suburbs and neighbourhoods that could better explain how the virus spread, but there are clues.

In the greater Soweto area, cases increased 252% this month compared with 200% for the rest of Johannesburg.

Drawing on experience tackling HIV and tuberculosis, the government began screening and testing in communities to catch new infections early.

But the virus spread too swiftly, and there weren't enough personnel or reagents to process so many tests, researchers at two laboratories and Moosa told Reuters.

Data from the National Institute for Communicable Diseases show wait times at public hospitals, the worst hit by shortages, shot up from two days in mid-April to 12 by mid-June, before falling to between four and six days in July.

"That's clearly far, far too long for it to be of any use in terms of preventing spread of infection. Two days is what you need," said Richard Lessells, an infectious disease specialist at the KwaZulu-Natal Research and Innovation Sequencing Platform.

Officials at the department of health did not respond to phone calls and emails seeking comment.

Twenty-six years after apartheid ended in 1994, healthcare remains divided between a world class private system for those who can afford it, and an overburdened public one for the mostly Black citizens who cannot.

Just 17% of South Africans have medical insurance, the latest government figures from 2017 show. But healthcare provider Netcare estimates more than half of the country's 6,000 critical care beds are in private hospitals.

When the first coronavirus cases came to Thelle Mogoerane, on the edge of the mostly black Vosloorus town, southeast of Johannesburg, "it was pure chaos," Sicina said.

A 30-bed isolation ward was set up in mid-April, but it filled so quickly that 18 critically ill patients were put in a regular casualty ward.

Five more COVID-19 wards have been added since then, but some patients are still spilling over into general wards, Sicina said. Until early May, nurses treated the patients protected only by a surgical mask and apron, he added.

Another nurse corroborated his account; she is not authorized to speak to media and declined to be named.

Kekana said PPE has been available at the hospital since the beginning of the pandemic.

At least eight patients admitted for other complaints caught COVID-19 there, they said, along with 240 staff. Last week, they held a memorial service for two nurses who died.

Kekana said she was not aware of the figure of 240 staff infected, but confirmed a memorial service for one nurse.

The hospital now has the masks, gowns and visors it needs, the nurses said. But shortages persist at other facilities, said Sibongiseni Delihlazo, spokesman for the main nurses' union, the Democratic Nursing Organisation of South Africa.

A nurse at Bisho Hospital, in the more rural Eastern Cape province, said patients were getting just 30 minutes of oxygen at a time because there weren't enough access points.

Nurses sometimes filled balloons with oxygen for the sickest patients, she said, on condition of anonymity.

The hospital and provincial health department did not respond to requests for comment.

The government has recruited health workers and is building field hospitals with partners to accommodate the overflow. It has also negotiated with private providers to take public patients if needed.

But he added, "it isn't the world class super centres that are dealing with the public health pandemic. It's the places in the trenches."