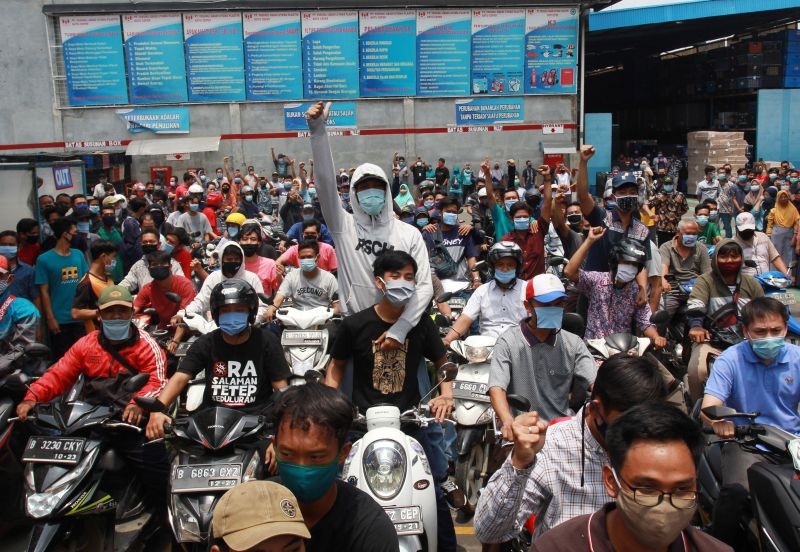 Demonstrations took place in at least 12 places on Wednesday, with police detaining 183 people outside parliament in Palembang in South Sumatra, and holding more than 200 protesters for questioning in the capital Jakarta, a day after tear gas and water cannon were used to disperse crowds in multiple cities.

The protesters are demanding the government revokes an "omnibus" jobs creation law that has outraged unions, who say it lopsidedly favours businesses and will hurt workers and the environment.

Footage from the Javanese city of Semarang showed angry protesters tearing down the fence of the local parliament complex, while in Jakarta and Bandung, students threw stones and burned tyres.

The sweeping legislation has been championed by President Joko Widodo as key to boosting an economy hit hard by the coronavirus pandemic by cutting red tape and attracting foreign investment.

But academics from prominent universities expressed disappointment on Wednesday over a law they said was problematic and would likely lead to a judicial review.

Susi Dwi Harijanti of Bandung's Padjajaran University said the law's swift passage "shocked everybody" because parliament was usually "slow in making regulations, including the ones that are clearly needed by the people".

Indonesia's largest Islamic organisation, Nahdlatul Ulama (NU), also weighed in, with its leader KH Said Aqil Siroj saying it would benefit only capitalists, investors and conglomerates and would "trample" on ordinary people.

Top economic minister Airlangga Hartarto on Wednesday sought to calm protesters and said many of their fears were based on false information.

"I can assure you wages will not be cut," he told a virtual news conference.

Other ministers have defended controversial provisions, including a land bank, saying the government would not take away farmers' lands and the law would not weaken environmental protection.