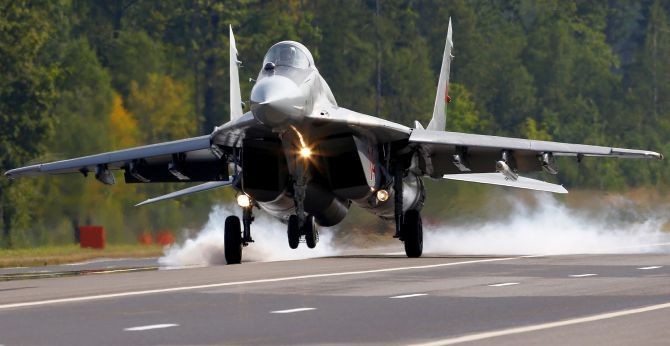 New Delhi, July 7 (ANI): Amid tensions with China, the Indian Air Force carried out night time combat air patrols over the Eastern Ladakh sector. The Indian Air Force carried out intensive night operations involving its fighter aircraft including the MiG-29 and Sukhoi-30MKI along with its Apache attack helicopters and the Chinook heavy-lift helicopters.

Notwithstanding the strong winds and the chilling weather, the ground crew and pilots flew using even very small windows when the wind speed is low.

Explaining the significance of night time operations, senior fighter pilot Group Captain A Rathi deployed at the forward base said, "Night operations have an inherent element of surprise. Indian Air Force is fully trained and ready to undertake an entire spectrum of operations in any environment with the help of modern platforms and highly motivated personnel."

At the forward airbase near the China border, the first to take off were the lethal Apache attack helicopters.

The pilots of the Apache choppers could be seen flying with their night vision goggles which allows them to navigate through the mountains around the airbase and the dark night.

Soon after, the mighty Chinook choppers came out on the runway and hovered for some time adjusting to the wind speeds before taking off towards the eastern parts of Ladakh.

Around the same time when the MiG-29s were taking off from the forward airbase, multiple air bases in the northern sector were activated from where fighter including the Mirage-2000, Su-30MKI and Jaguars took off towards different locations along the Line of Actual Control from Ladakh to Arunachal Pradesh.

"The motivation level of troops at the airbase is very high. The morale is very high like our motto Nabha Sparsham Deeptam (Touch the Sky with Glory)," Warrant Officer P Sharma said.

The entire base with its flurry of activities is playing a crucial role in enhancing the combat preparedness of the country along the China border.

Air activities in the Ladakh area and other places along the China border have gone up extensively soon after the Chinese started building up and went up further after the Galwan valley clash on June 15 in which 20 Indian Army men lost their lives.