In Philippine slums, heat, hunger take a toll under lockdown 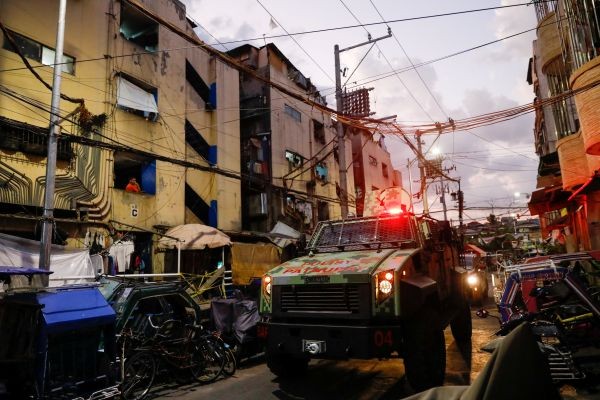 An armoured personnel carrier roams around tenements reminding residents to stay indoors, amid the lockdown to contain the coronavirus disease (COVID-19), in the slum area of Tondo, Manila, Philippines, May 4, 2020. Picture taken May 4, 2020. (REUTER File Photo)
World
25th May 2020

MANILA, May 25 (Reuters): One by one, Michelle Asinto's six children take the plate of rice doused in soy sauce and eat their share before passing it on.

This is what a meal can look like in the slums around the Philippine capital Manila. Under lockdown since March 16, many families have lost regular incomes and forced to survive on government aid that can be sporadic and often not enough.

"Every day we just wait for our ration but it only comes once or twice a week," said Asinto, 42, whose plywood and tin house sits precariously on top of another, reachable only by ladder.

They share a common area with dozens of other people, making social distancing almost impossible. Face masks, though mandatory, are an expense few can afford.

Because her family lives illegally along the trash-filled estuary, Estero de Magdalena, it did not qualify for two cash payments of 5,000-8,000 pesos ($99-$158) in aid the government handed out in April and May.

At Aimelyn Robeno's home, three generations are crammed into a tiny, sweltering space, including siblings and 10-month-old baby.

"I actually think I'll get sick inside this house because of the intense heat," said Robeno, 29.

"We may be saved from the virus but it doesn't matter if we're going to die of hunger anyway."

Some quarantine restrictions in place in Manila were eased 10 days ago, but many remain. Transport curbs means no work for rickshaw driver Loreto Vergara who lives in Manila's Tondo area and spends entire days at his 10 square metre (108 sq ft) home, with his six children, son-in-law and grandchild.

"We're already the most vulnerable, and yet we're still the ones given the least," said Vergara, 47, preparing for a meal of sweet potatoes donated by a neighbour.

"It's really hard to stay indoors in a place like this. It's too hot. It's as if you're under a fire."

Maribel Ballena, 28, has four mouths to feed. She earns some money selling garlic at the market.

"Most days we just eat two meals, one of sardines, and instant noodles," she said.

The Philippines has 14,319 confirmed coronavirus cases overall, among those 873 deaths.