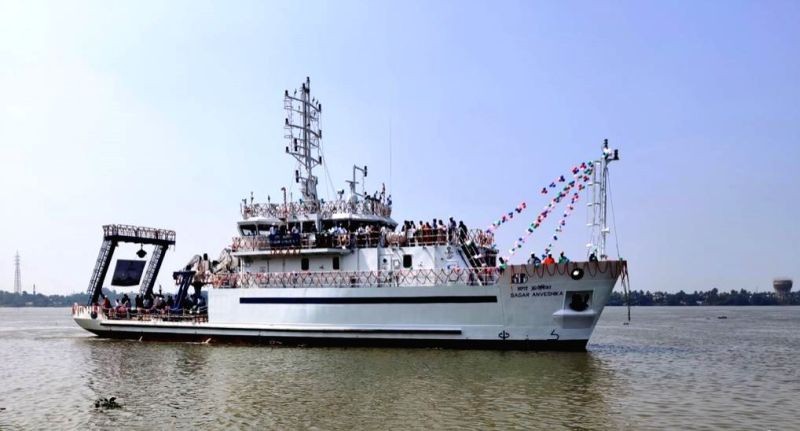 NEW DELHI, JANUARY 12 (IANS): Indias marine scientific research capability has received a boost with the commissioning of coastal research vessel (CRV) Sagar Anveshika. The vessel joins the fleet of three other vessels of the same class -- Sagar Tara, Sagar Nidhi, and Sagar Sampada --and will help Indian scientists to undertake a variety of oceanographic research tasks.

The vessel is fitted with 'state of the art' laboratories and 25 scientists can be embarked to conduct research. The onboard submersible can dive 6 km below the sea and the scientists would be able to undertake research for nearly 16 hours. This capability, is a shot in the arm of India's scientific knowledge of oceans and sea.

Sagar Anveshika, according to Union Minister Harsh Vardhan, would also augment India's Blue Economy, which figures prominently in the country's march towards sustainable development of sea based resources.

Blue Economy is now considered as the fountainhead of a number of national priorities which can potentially trigger national growth, economic prosperity and job creation. While dedicating the Kochi-Mangaluru natural gas pipeline to the nation last week, Prime Minister Narendra Modi stressed that Blue Economy will be an important source of 'Aatamnirbhar Bharat' and sketched out a multi-pronged plan for "improvement of coastal infrastructure and protecting the marine ecosystem".

At the heart of marine scientific research and Blue Economy is data which is generated by sensors, machines and humans. A large number of platforms, observation stations and monitoring devices are embedded-positioned at vantage locations under the sea, on the water, and in the space. These continuously observe, collect and transmit scientific data which is characterised by 5Vs i.e. 'volume, velocity, variety, veracity and value'.

Besides, it is a mix of structured and unstructured data and therefore presents major challenge for scientists to obtain clear trends, determine outcomes and initiate responses. There will be in future billions of devices receiving/transmitting zettabytes (ZB) of data and would therefore would have to be kept in special storages.