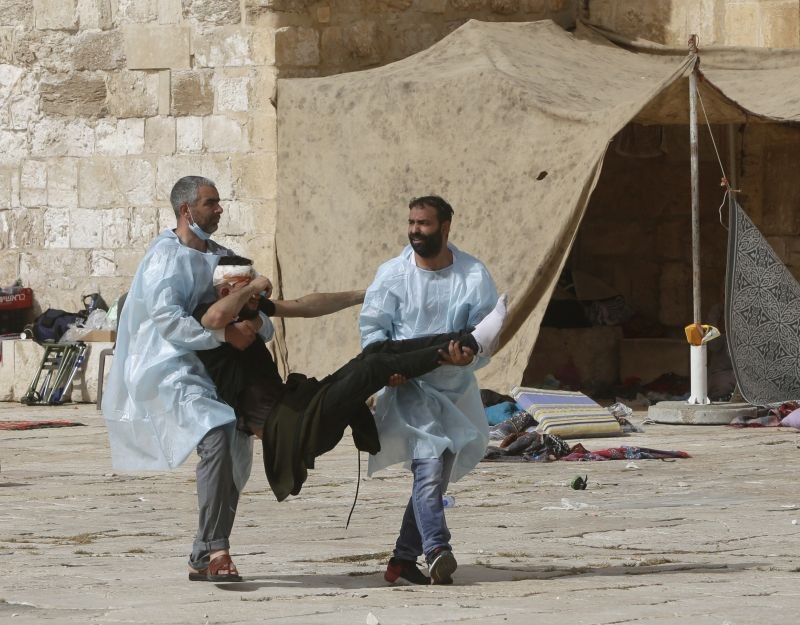 Palestinians evacuate a wounded man during clashes with Israeli security forces at the Al-Aqsa Mosque compound in Jerusalem's Old City on May 10, 2021. Israeli police clashed with Palestinian protesters at the flashpoint Jerusalem holy site on Monday, the latest in a series of confrontations that is pushing the contested city to the brink of eruption. Palestinian medics said at least 180 Palestinians were hurt in the violence at the Al-Aqsa Mosque compound, including 80 who were hospitalized. (AP/PTI Photo)

Jerusalem, May 10 (AP): Israeli police firing tear gas, stun grenades and rubber bullets clashed with stone-throwing Palestinians at a flashpoint Jerusalem holy site on Monday, the latest in a series of confrontations that threatened to push the contested city toward wider conflict.

More than a dozen tear gas canisters and stun grenades landed in the Al-Aqsa Mosque, one of Islam's holiest sites, as police and protesters faced off inside the walled compound that surrounds it, said an Associated Press photographer at the scene.

Smoke rose in front of the mosque and the iconic golden-domed shrine on the site, and rocks littered the nearby plaza. Inside one area of the compound, shoes and debris lay scattered over ornate carpets.

More than 305 Palestinians were hurt, including 228 who went to hospitals and clinics for treatment, according to the Palestinian Red Crescent. Seven of the injured were in serious condition.

The confrontation was the latest after weeks of mounting tensions between Palestinians and Israeli troops in the Old City of Jerusalem, the emotional center of their conflict. There have been almost nightly clashes during the Muslim holy month of Ramadan, already a time of heightened religious sensitivities.

Most recently, the tensions have been fueled by the planned eviction of dozens of Palestinians from the Sheikh Jarrah neighbourhood of east Jerusalem where Israeli settlers have waged a lengthy legal battle to take over properties.

Monday was expected to be particularly tense since Israelis mark it as Jerusalem Day to celebrate their capture of east Jerusalem in the 1967 Mideast war.

On Monday, two anti-Arab members of Israel's parliament, surrounded by an entourage and police, pushed through a line of protesters in the Sheikh Jarrah neighbourhood.

Several Arab members of parliament were among those trying to stop Betzalel Smotrich and Itamar Ben Gvir, amid shouting and jostling.

At one point during the scrum, the protesters pounded on the sides of a dumpster, and one man yelled at Smotrich in Arabic, Get out of here, you dog!

Smotrich and Ben Gvir eventually got to the other side of a police barricade and entered a house already inhabited by settlers.

Over the past few days, hundreds of Palestinians and several dozen police officers have been hurt in clashes in and around the Old City, including the sacred compound, which is known to Jews as the Temple Mount and to Muslims as the Noble Sanctuary.

The compound which has been the trigger for rounds of Israel-Palestinian violence in the past, is Islam's third-holiest site and considered Judaism's holiest.

An AP photographer at the scene said that early Monday morning, protesters had barricaded gates to the walled compound with wooden boards and scrap metal. Sometime after 7. am, clashes erupted, with those inside throwing stones at police deployed outside. Police entered the compound, firing tear gas, rubber-coated steel pellets and stun grenades.

At some point during the morning about 400 people, both young protesters and older worshippers, were inside the carpeted Al-Aqsa Mosque. Police fired tear gas and stun grenades into the mosque.

Police said protesters hurled stones at officers and onto an adjoining roadway near the Western Wall, where thousands of Israeli Jews had gathered to pray.

After several days of Jerusalem confrontations, Israel has come under growing international criticism for its heavy-handed actions at the site, particularly during Ramadan.

A White House statement said that Sullivan called on Israel to pursue appropriate measures to ensure calm and expressed the U.S.'s serious concerns about the ongoing violence and planned evictions.