It’s taxation trouble all over again 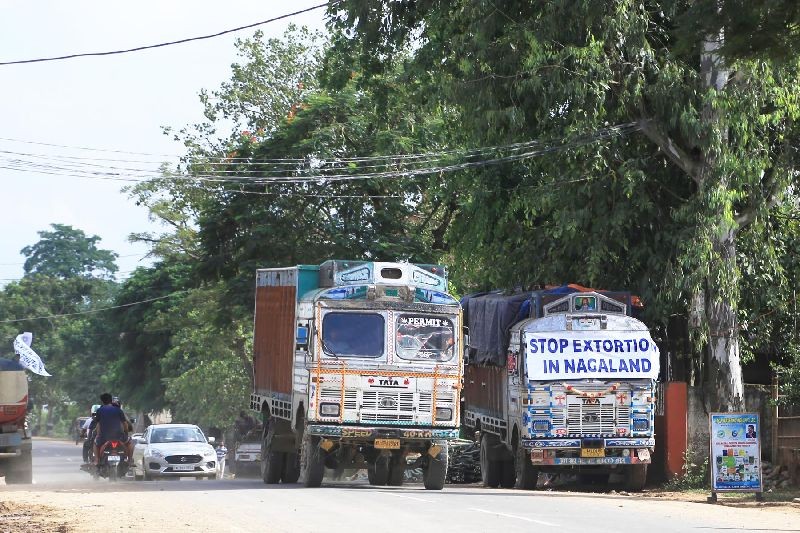 A Dimapur-bound truck, bearing a protest banner, parked on the side of NH 29 in Lahorijan on September 29 during the indefinite chakka jam called by truckers. (Morung Photo by Soreishim Mahong)
Nagaland
29th September 2020

Over a hundred trucks were stranded across the inter-state border at NH 36 and 29, as the ‘chakka jam’ agitation called by transporters began at 7:00 am, September 29.  As many as 5 truckers’ unions based in Dimapur, Lahorijan, Khatkhati and Bokajan had earlier warned of indefinitely pulling the brakes on goods trucks bound for Dimapur from Assam in the aftermath of the killing a truck driver— Jiten Gogoi, who was shot dead in Dimapur on September 22.

The unions, on September 24, issued a press statement demanding the Nagaland state government of prompt against the perpetrators, besides compensating the bereaved family, or face an indefinite stoppage of commercial trucks to Dimapur. It stipulated 3 days, which expired on September 27.

The motive behind the shooting is still unclear but it has been largely attributed to unsolicited taxation by Naga Political Groups (NPGs). Transporters have for years complained of burgeoning illegal taxation in Dimapur by NPGs and government agencies. It is in addition to the collection of money by their own brethren in the name of truckers’ welfare along the Golaghat Road after crossing the inter-state New Field Check Post.

As is common knowledge but rarely documented, the chain of taxation, both illicit as well as statutory, begins at the two inter-state check posts in Dimapur.

Without accounting the taxation on the smaller commercial vehicles, trucks continue to be a target of choice. On most occasions, the additional financial burden incurred by truckers is reimbursed or borne by the traders in Dimapur, for whom the truckers ferry goods. The extra costs eventually passes on to the consumers.

According to the transporters, the ‘tax’ levied by the NPGs varies depending on the tonnage of the truck.

Transporters stranded in Lahorijan revealed today that no less than Rs 28 thousand is incurred as additional ‘tax’ expenses per trip starting from the New Field Check post-Mao Gate till Imphal.

One transporter said that each truck, on every entry to Dimapur, has to pay to at least 5 groups, which would rise to as many as 10 on days. The amount levied by two NPGs on 6-wheelers, on entry, ranges from Rs 6000-8000 and additional Rs 5500 as “Goods Tax.”

This is exclusive of the yearly tax paid in terms of lakhs as “Godown Tax.”

The government agencies also join in, the truckers revealing that they pay Rs 200-300 as “Gate Pass/Entry Tax” to the police on every entry or at every police check post.

For a Manipur-bound truck, it starts all over again, starting with Mao Gate in Senapati till Imphal. It was informed that each truck spends Rs 500-700 paying the police at Mao Gate.

Police says investigation making progress
The Dimapur police have maintained that investigation into the September 22 shooting is progressing. A police official informed that a Special Investigation Team, set up in the aftermath, was on the job. While stating that the police cannot comment on the details of the case “when investigation is on,” it was added that some arrests have been made and as many as 19 persons have been questioned.

The official also said that the district administrative set up has not received any representation, officially, from the agitating transporters specifying their demands.