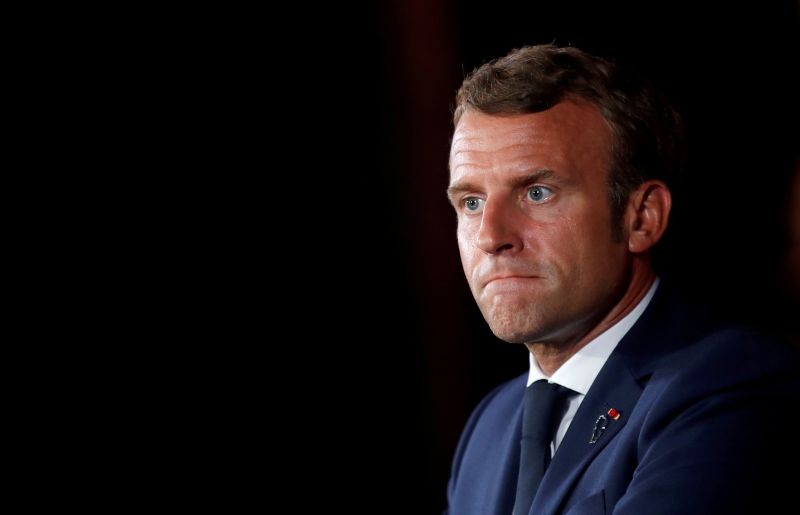 French President Emmanuel Macron looks on as he attends a news conference at the Pine Residence, the official residence of the French ambassador to Lebanon, in Beirut, Lebanon on September 1, 2020. (REUTERS File Photo)

PARIS/BEIRUT, September 13 (Reuters): French President Emmanuel Macron has been pressing Lebanese politicians to deliver on promises to form a new government this week and haul the country out of its worst crisis since the 1975-1990 civil war, his office said on Sunday.

Lebanon's leaders promised Macron on Sept. 1 during his visit that they would form a cabinet of technocrats without party loyalties in about two weeks to end a crippling economic crisis made worse by a huge blast in Beirut on Aug. 4.

An official source said Prime Minister-designate Mustapha Adib was expected to present his plan for a cabinet to President Michel Aoun on Monday, seeking to accelerate a process that typically takes months of haggling over ministries.

"The (French) president continues his calls with the various political players in Lebanon," the French presidential office said, without giving details about any discussions.

Macron held phone talks on Saturday with Parliament Speaker Nabih Berri, a top Shi'ite politician, in an effort to remove an obstacle over the finance ministry post, which is traditionally controlled by Shi'ites, a political ally of Berri said.

Berri, head of the Amal Movement, an ally of the politically powerful and heavily armed Shi'ite group Hezbollah, said in a statement on Sunday his group opposed the manner the cabinet was being formed and did not want to join. But he said he would cooperate to stabilise the nation.

Berri cited a concern about a lack of consultation and what he called resorting to "foreign leverage" in forming the cabinet. The same phrase was used in a speech on Sunday by another Hezbollah ally, Christian politician Gebran Bassil.

The prime minister-designate, a Sunni, has made few public comments. But sources say he wants to shake up the leadership of ministries, some of which have been controlled by the same groups for years.

Donors have demanded reforms to unlock billions of dollars in aid that was originally pledged in 2018 but never disbursed.

Any government needs the blessing of the main Christian and Muslim factions to ensure it conforms with Lebanon's sectarian system of power sharing.

France has drawn up a detailed roadmap for tackling corruption and other problems that have paralysed the banking system and sent the currency into tailspin.

Political sources say Berri's position towards the cabinet hardened after the United States imposed sanctions on allies of Hezbollah, a group Washington deems a terrorist group but which Paris says has a legitimate political role.