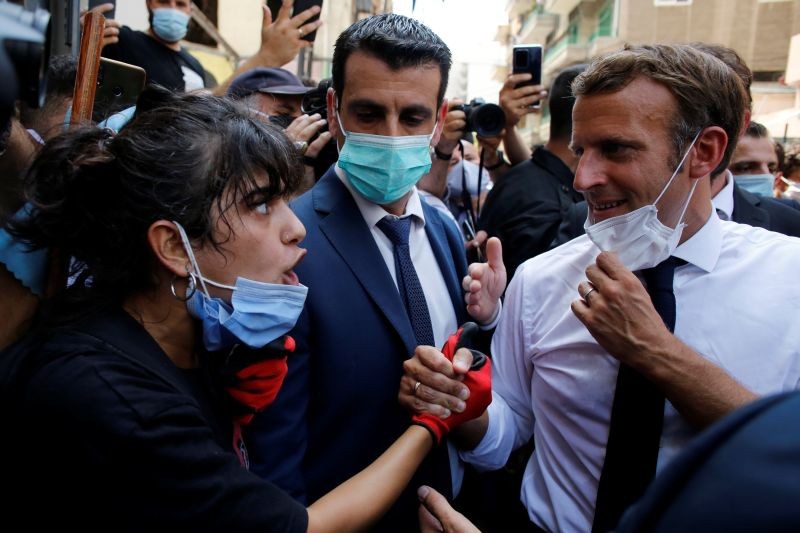 French President Emmanuel Macron listens to a resident as he visits a devastated street of Beirut, Lebanon on August 6. (REUTERS Photo)

BEIRUT/PARIS, August 6 (Reuters): French President Emmanuel Macron promised angry Lebanese crowds in shattered Beirut that aid to rebuild the city would not go to "corrupt hands" and he urged the political authorities to carry out reforms or risk plunging Lebanon deeper into crisis.

Macron was speaking during the first visit by a foreign leader to the Lebanese capital since the biggest blast in its history tore through the city, killing at least 145 people, injured 5,000 and leaving swathe of the capital in tatters.

After visiting the port at the epicentre of the blast, Macron was greeted by crowds in nearby Gemmayze street, one of the most damaged in the city, shouting chants against the political establishment and endemic corruption.

"I guarantee you, this aid will not go to corrupt hands," said Macron, who was wearing a black tie in mourning.

He promised to send more medical and other aid to Lebanon, while those around him chanted "Revolution" and "The people want the fall of the regime."

"I will talk to all political forces to ask them for a new pact. I am here today to propose a new political pact to them," he said, shaking hands on roads strewn with rubble and flanked by shops with windows blown out.

Residents, shop owners and volunteers have led clean-up efforts in the popular street of cafes and restaurants, where the blast ripped out balconies and smashed store facades.

Macron was applauded by the crowds in the neighbourhood, in a mainly Christian part of the capital, with chants of "Vive la France! Help us! You are our only hope!".

Some also chanted against President Michel Aoun, who is a Maronite Christian under Lebanon's political arrangement of dividing powerful positions between sects.

Macron then headed to the Baabda presidential palace, where he was due to hold talks with Aoun, Prime Minister Hassan Diab, who is a Sunni Muslim, and Nabih Berri, the speaker of parliament who is a Shi'ite.

After that, he will meet other political groups and civil society at the French ambassador's residence.

France has long sought to support its former colony and has sent emergency aid since the blast. But it has joined other Western nations in pressing for reforms to root out corruption, cut spiralling budget spending and reduce a mountain of debt.

Shortly after landing in Beirut, Macron said France's solidarity with the Lebanese people was unconditional, but said he wanted to deliver some "home truths" to political figures.

"Beyond the blast, we know the crisis here is serious, it involves the historic responsibility of leaders in place," Macron told reporters after being met at the airport by Aoun.

"We can't do without telling each other some home truths," he added.

"If reforms are not carried out, Lebanon will continue to sink," he said, citing reforms to the energy sector, as Lebanon suffers acute power shortages, and public tenders, as well as measures to fight corruption.

Officials blamed the blast on a huge stockpile of a highly explosive material stored for years in unsafe conditions at Beirut port. The government ordered some port workers arrested.

Many Lebanese, who have lost jobs and watched savings evaporate in a financial crisis, say the blast was symptomatic of neglect and corruption in the political system.