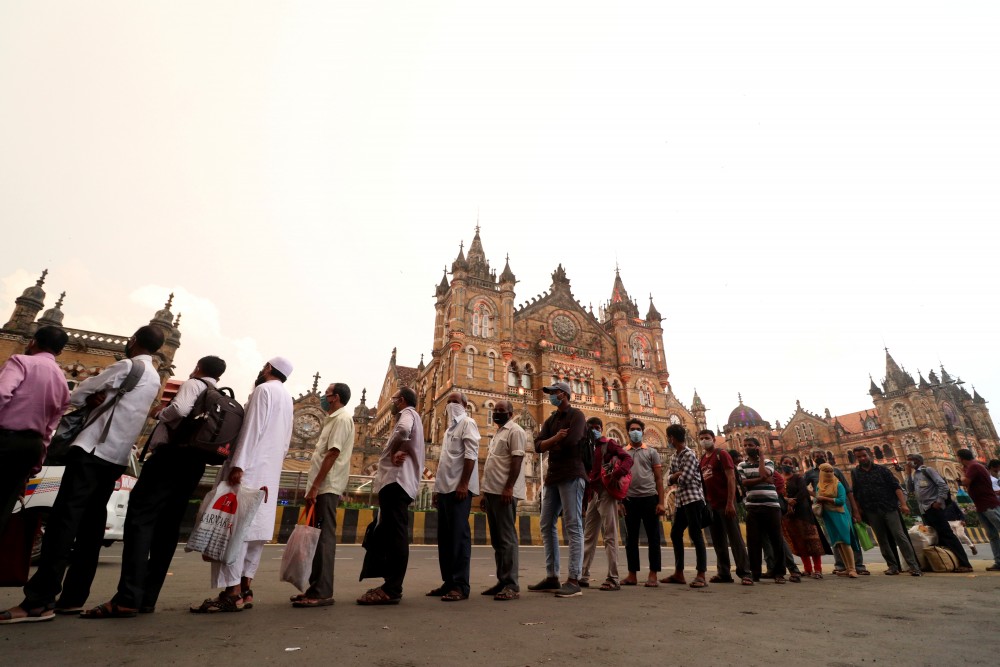 People wait in a line to board a passenger bus during rush hour, amidst the coronavirus disease (COVID-19) outbreak, in Mumbai, India, September 9, 2020. (REUTERS/Niharika Kulkarni)
India
11th September 2020

MUMBAI, September 11 (Reuters): India's biggest and richest state, Maharashtra, recorded its millionth coronavirus infection on Friday, putting it on par with Russia in the pandemic and stifling India's attempts to turn around an economic plummet.

Cases in the western state, home to financial capital Mumbai, passed 1 million as infections have been rising some 20,000 a day recently. If it were a country, the state would now rival Russia for the fourth-highest caseload globally.

The rise in the state of 130 million people has propelled India's COVID-19 surge, accounting for nearly one-quarter of the national total. India is likely to hit 5 million cases in coming days, behind only to the United States.

With the virus surging unabated through Maharashtra's urban and rural areas and state authorities struggling to curb deaths, Prime Minister Narendra Modi is hamstrung in trying to revive an economy that shrivelled 23.9% in the second quarter from a year earlier.

"Maharashtra accounts for approximately 15% of India's GDP. Unless Maharashtra gets back on its feet, India's chances for an economic recovery are bleak," said Reuben Abraham, head of IDFC Institute, a policy think-tank.

Yet authorities in Maharashtra are unable to ease many restrictions in the state. Public transport, malls and other businesses remain depressed even as the rest of India slowly gets back to business.

That is unlikely to change soon for a state that is home to several major industries, including its three most valuable companies: Tata Consultancy Services Ltd, Reliance Industries Ltd and HDFC Bank.

While cities around India have resumed commuter rail, Maharashtra has held off. In Mumbai - where packed trains define the workday - suburban train service has been halted since March for all but essential workers.

Resuming public transport in the city this month would lead to a second wave, which would be "difficult to manage", says a research paper submitted to Mumbai authorities this week.

"People have tired after spending months at home and they're stepping out despite knowing they could get infected," said Subhash Chavhan, a surgeon in Satara district. "They're no longer taking coronavirus seriously."

Tiny Rajewadi village did not have a single confirmed coronavirus case until mid-August. Recently, one in every four was testing positive for the virus. [L4N2FU3GS]

Also contributing to Maharashtra's infections was the festival last month for the Hindu elephant-headed god Ganesh, an 11-day Mumbai celebration that sees huge numbers of people travelling to and from their hometowns.

"Before the Ganesh festival there were on an average 60 new cases daily in the district. Now we're recording more than 150," said an official in the coastal district of Ratnagiri.

COVID-19 is also deadlier in Maharashtra, where it has killed 2.85% of people with confirmed infections, well above the national mortality rate of 1.68%. Maharashtra's death toll, over 28,000, accounts for 37% of India's total.

Rajesh Tope, Maharashtra's health minister, defended the higher caseload saying the state has been doing more tests than others and is being more transparent too.

"We've never tried to hide cases just because they are rising," Tope said.