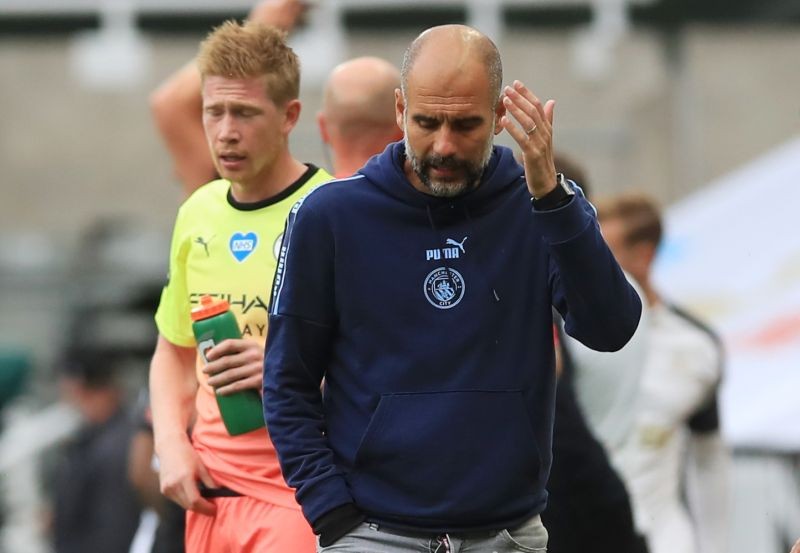 Manchester City manager Pep Guardiola with his players during the drinks brake, as play resumes behind closed doors following the outbreak of the coronavirus disease (COVID-19) Owen Humphreys/Pool via REUTERS
Sports
2nd July 2020

(Reuters): Manchester City must rebuild if they are to challenge Liverpool for the Premier League title next season, manager Pep Guardiola has said.

Guardiola, whose team will give Liverpool a guard of honour when they meet at the Etihad Stadium later on Thursday, said the need to rebuild was one all clubs faced.

"We have to rebuild. It happens at clubs around the world," he said. "We have to accept it and take the right decisions to try to maintain the level that we have.

"We have exceptional players but after the season finishes we will reflect."

City have already conceded 10 more goals in the league than they did in the whole of last season's title-winning campaign, and still have seven games left.

Midfielder Fernandinho, 35, and striker Sergio Aguero, 32, are out of contract at the end of next season while David Silva, City's 34-year-old captain, will leave at the end of the current campaign.

"Fernandinho and Sergio have one year left," Guardiola said. "I don't know if they will extend or not. Some players have to be replaced, but it's not a disaster or a bad thing, it's part of football."

Guardiola also defended the decision to sell winger Leroy Sane to Bayern Munich, saying, "If guys don't want to stay, they have to leave.

"We are not getting the best of these players if in their mind they are not happy here."