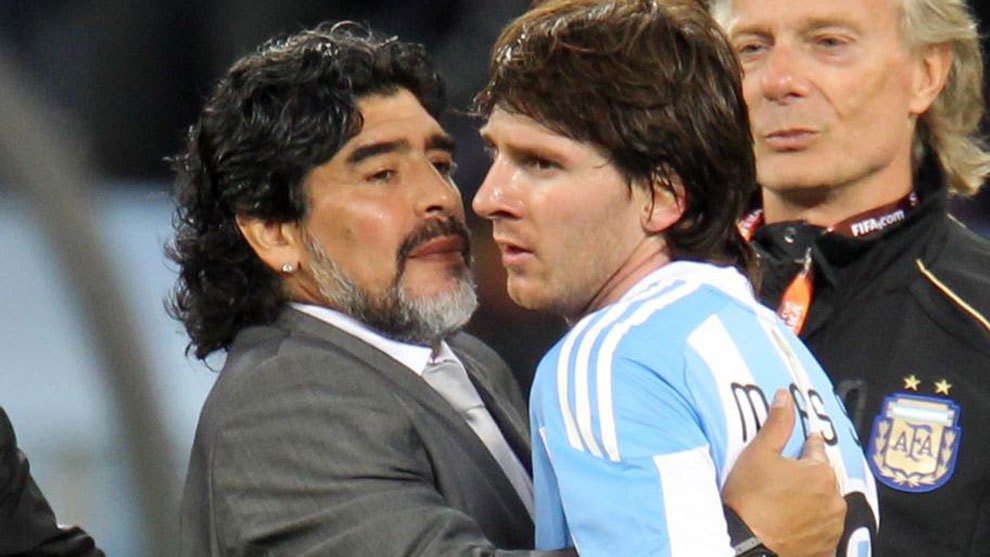 NEW DELHI, NOVEMBER 26 (IANS): A glance at the statistics and some hard facts would show that as far as their individual careers are concerned, Lionel Messi has eclipsed his legendary former Argentina coach Diego Maradona, who passed away on Wednesday.

At the international level, 33-year-old Messi has 87 goals in 165 appearances, making him Argentina's all-time highest goal scorer. Maradona scored 42 in 106 recorded appearances. Messi's goal-scoring record at club level is off the charts -- he has netted a total of 640 goals in more than 700 senior appearances for Barcelona. Maradona made 588 appearances for Argentinos Juniors, Boca Juniors, Barcelona, Napoli, Sevilla and Newell's Old Boys and scored 312 goals.

And yet, going by most descriptions of Buenos Aires through the prism of its beloved sport of football, the endless murals and graffiti that adorn its streets show Maradona, not Messi, in different forms of divinity. The difference in the way that the two greats are perceived in their home country can perhaps be put down to two factors -- their respective records at the World Cup and their off-field transgressions.

Both Messi and Maradona have felt the extreme pressures that come with captaining Argentina at the World Cup. The difference, however, lay in the fact that Maradona won the tournament at his second attempt, while for Messi, it has remained an unfulfilled quest in an otherwise illustrious career.

Messi, almost symbolically, trails Maradona by two goals in the World Cup goal-scoring records -- Messi has scored six times in 19 matches while Maradona has eight goals in 21 appearances. Maradona, after all, scored what has to be the most famous brace of all time against England in the quarter-finals of the 1986 World Cup.

At the 1990 World Cup, Maradona led Argentina to the final yet again. The tournament featured a bizarre incident in which Brazil's Branco claimed that Maradona and team mate Ricardo Giusti offered him water spiked with tranquilisers during half-time of the round of 16 fixture between the two teams. The press discredited the story at the time but Branco would be proven right many years later by Maradona himself, when the latter confessed to the episode in a TV show.

Maradona then played two matches at the 1994 World Cup before being sent back home for a failed drugs test, thus bringing the curtain down on his 17-year-long international career.

Anyone who has even remotely followed Messi's career would be able to say that trying to trick an opposition player into taking tranquilisers at half-time and failing a drugs test at a World Cup are all areas that the Barcelona superstar would never come close to. And in here comes the second difference.

A case of tax evasion is perhaps the most prominent of the handful of transgressions one can find on Messi at Barcelona. In the case of Maradona, however, his off-field troubles were as much a headline-maker as were the on-field acts of magic, among which were stories of his wild parties with the Naples mafia, and his dependence on cocaine and alcohol.

Where Messi is known to say the right things most of the times, one could hardly ever predict what might fall out of Maradona's mouth at any point. Messi has continually said that he respected his arch-rival Cristiano Ronaldo whereas Maradona had, at best, a love-hate relationship with Brazilian legend Pele, despite the fact that the pair hardly played in the same era and thus never competed for the same trophies.

This unpredictability has often led to Maradona appealing to a wide array of people around the world. Maradona's thoughts on the revolutionary Che Guevara, for example, was markedly different from what was taught to him and his peers in Argentina's schools at the time. He went on to get a tattoo of Guevara on his right shoulder and with time, Argentina came to accept the latter as well, culminating in a statue of Guevara being erected in Rosario in 2008. Maradona's love for Cuban leader Fidel Castro and other socialist political figures in South America established his political leaning as that of a staunch leftist.

Messi has remained apolitical throughout his life, his social commentary being limited to issues that plague Argentine football. His sudden retirement from international football after the 2016 Copa America final, in which Argentina failed to lift a major trophy for the third time in as many years, came to highlight the disjointed manner in which the sport was run in the country. It was also at this time that Argentina finally showed its love for Messi.

He came back, of course, and almost single-handedly pulled a stumbling Argentina to qualification for the 2018 World Cup, where they were dumped out in the Round of 16 by eventual champions France. Messi cut a forlorn figure for much of that tournament, famously appearing to cover his face while the Argentine national anthem was being played ahead of their shock 1-1 draw against Iceland.

Messi may yet win a World Cup -- 2022 is not too far away and the 33-year-old player remains one of the most reliable forwards in world football, but chances of him becoming the saint-like mythical figure that Maradona became long before his death on November 25, 2020, look rather slim.

"He has left us but he will never leave us because Diego is eternal," said Messi in his tribute to Maradona. Messi's legacy may well turn out to be eternal as well. But while it may be perilous to predict the future, it would be safe to say that it would be markedly different from Maradona's.