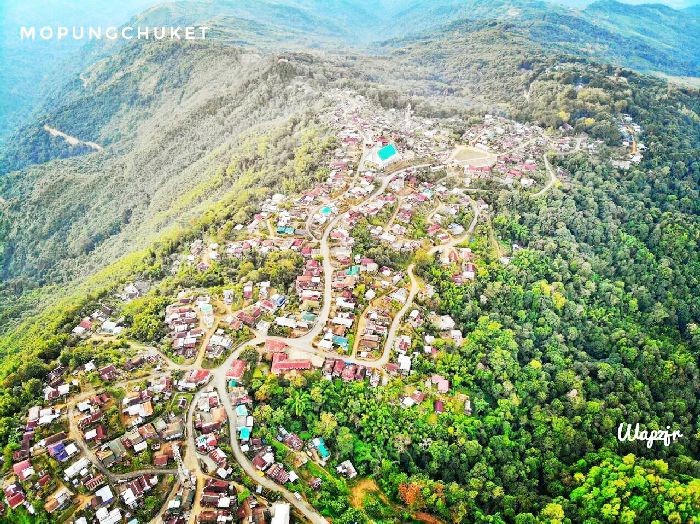 Mopungchuket is perhaps the most visible rural tourism destination in Mokokchung district located 16 kilometers off the district headquarter. Recognized as one of the cleanest villages in Nagaland, Mopungchuket is also famous for the legendary love story of Jina and Etiben, regarded as the ‘Romeo and Juliet’ of the Ao Nagas.

The village has been in the news for its effort in beating plastic pollution and declaring it as a plastic free village. Known for its clean living, picturesque landscape, parks, memorabilia and artifacts exhibit, and the warmth of the villagers, Mopungchuket receives thousands of visitors annually.

2020 was supposed to be the big year for MCTS. A new team of young members took over the reins, with new plans to improve the tourism industry in the village. Mopungchuket village recorded a total of close to 8000 visitors last year, including local, national and foreign tourists. They were expecting to increase the visitors’ footfall to at least 10,000 this year.

Instead, what came was a virus. And with it, the worst crisis Mopungchuket’s tourism sector has ever faced.

“The lockdown in the wake of the global pandemic have totally crushed the plans of MCTS. The nascent tourism industry in the village is now under immense financial distress. Our little savings from last year's revenue have by now exhausted and we are now facing it difficult to manage the tourist sites in the village or to pay the staff,” said one member of the MCTS.

“With no source to pay the employees and to help the affected households, we are now helpless and at a dead end,” he added.

“Once the situation improves, we will have to start from scratch all over again.

We hope the government has taken cognizance of the plight of those in the travel and tourism industry. We request the government to formulate a recovery plan and to offer a stimulus package especially for the community-based stakeholders of the industry”, Limalenden added.

Rural tourism in Nagaland is mostly community based and with the pandemic, the lockdowns have all but ground the sector to a halt.

Similar to Mopungchuket, rural tourism in Longhkum village is also at a dead end.

Chungatangzuk, Manager of Longkhum village tourist lodge commented that with no visitors he is now jobless and hopes that the government will look into the problems faced by the rural tourist managing communities.