Myanmar state of emergency could be extended 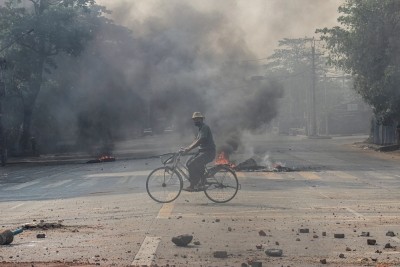 He did not give a clear timeline for elections, but said the state of emergency could be extended for six months or more, in excerpts from an interview with CNN published late Thursday, reports dpa news agency.

He said a free and fair vote would have to be held within two years under the country's constitution, but also told the broadcaster "the standard of democracy in Myanmar will not be the same as from Western counties".

Zaw Min Tun also said there is "solid evidence" of the voter fraud which the army has used to justify seizing power, but did not present any proof to CNN.

Civilian leader Aung San Suu Kyi was detained by the military in the February coup after her National League for Democracy (NLD) party won an election by a landslide.

Local observers have said the vote was credible.

The military's actions have prompted widespread protests, to which soldiers have responded with a violent crackdown on the population.

Nearly 2,850 have been arrested, and at least 598 have been killed, including 48 children, according to the Assistance Association for Political Prisoners (AAPP), a non-profit organization.

"There will be deaths when they are cracking down (on) the riots, but we are not shooting around without discipline," he said.