Roping in nearly 10,000 farming households from 85 villages in the districts of Tuensang, Phek and Kiphire for a large scale livelihood programme under the North East Initiative Development Agency (NEIDA), there are success stories that prove how improved services are vital for economic prosperity of farmers

As a testament to this, there are farmers now earning more than Rs 2-3 lakhs per annum from agriculture and piggery alone.

NEIDA is an NGO promoted by the Tata Trusts as the nodal agency in the North East and works in the state of Nagaland, Mizoram and Arunachal Pradesh with their work focusing on addressing gaps in the value chain in agriculture and piggery, starting from inputs to production and marketing. 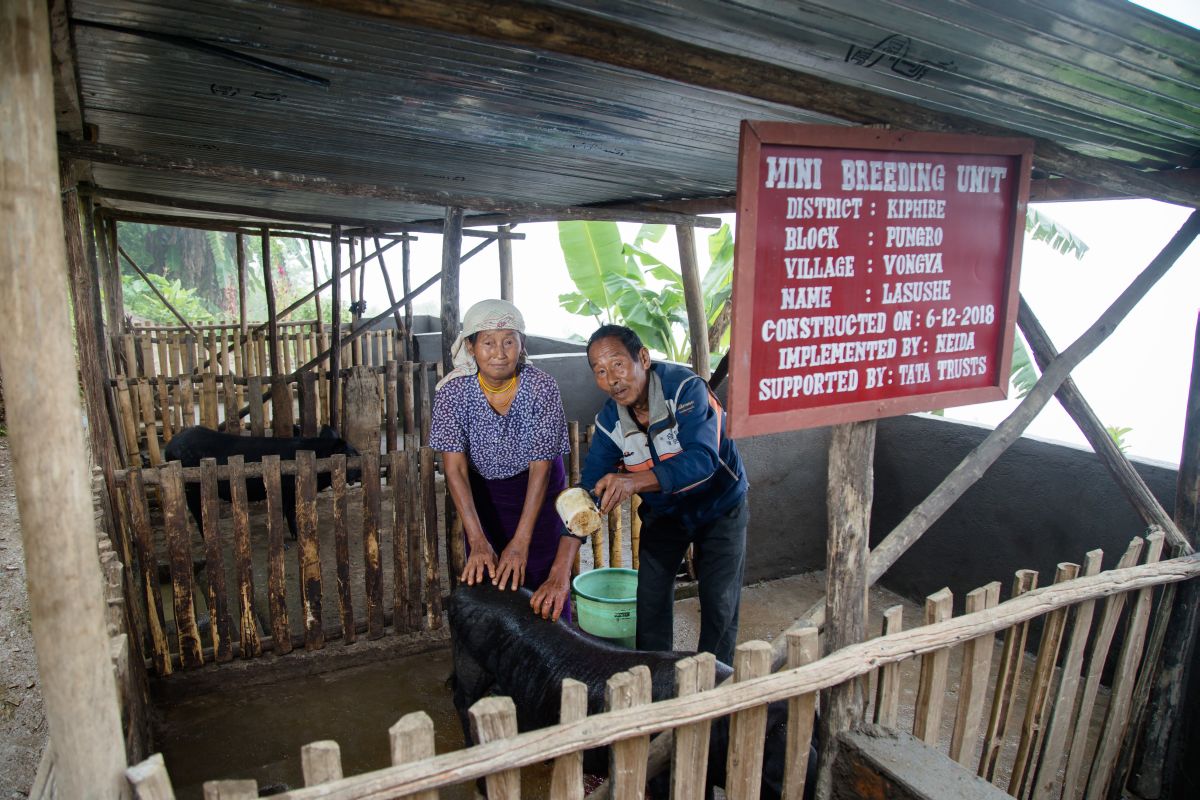 In an exclusive interview with the Team Leader for Nagaland, Sentimongla Kechuchar said that during the time of her joining, Tata Trusts had launched its North East Initiative programme and she has traveled extensively in these three states, developing projects in collaboration with local NGOs and stakeholders focusing on promotion of rural livelihoods.

Kechuchar previously had a brief stint with UNHCR at the refugee resettlement unit and thereafter worked at the National Foundation for India (NFI) a funding agency based in Delhi for five years before she joined the Tata Trusts in 2008 and moved to Bombay,

“Our approach in livelihoods is not so much the support that the farmers receive through our projects but to increase farmers risk taking abilities by putting in place essential services and facilities that the farmers require to scale up their farming operations – quality supply of inputs, access to knowledge and credit and assured marketing linkages”, she said.

As an indirect impact, she exuded hope that the success of these farmers will inspire the younger generation to view agriculture as a viable source of livelihood that can provide their families a decent standard of living. Also having received support from NABARD to work with 200 households in Pungro block to establish 200 acres orchard, she enlightened that farmers have started planting mango, papaya and orange saplings in 4 villages.

Through another NEIDA initiative called ecoNagaland, they are trying to develop a model on sustainable rural eco-tourism.
“Our basic premise is that the rural communities that are the main caretakers of our cultural heritage and the forests around their respective village should be the main beneficiaries of tourism as these are our USPs for which tourists travel to our state”, she put across.

However, she asserted that for the rural communities to be able to take advantage of avenues that tourism offers, their capacity to provide quality hospitality or guiding services etc., needs to be enhanced.

Currently working in Dzuleke, Thanamir and Fakim for the ecoNagaland initiative, they have facilitated the formation of Eco-tourism Boards and are developing their managerial capacities to implement sustainable eco-tourism activities in their respective villages.

“In the last 4-5 years more than 1,000 tourists have visited these villages and stayed at least one night in the village community guest house managed by the eco-tourism boards or in home stays. 38 porters and guides from the three villages are also registered with the Eco-tourism boards”, she informed.

Promoting farmer entrepreneurs
NEIDA is now developing strategies for the next phase of intervention focusing on promoting profitable Farmers Producers Organizations in all the three districts.

“We are targeting to promote more than 500 farmer entrepreneurs. However, for the agri and allied sector to fully realize its potential, our farmers require infrastructure facilities like accessible ware houses and storage facilities, all weather motorable roads and access to credit among other others”, she emphasized.

Nagaland being a mountainous state, Kechuchar observed that “we depend on our numerous springs for water for domestic use as well as for agricultural purposes.” She expressed concern that the flow of water from these springs have decreased over the years during the dry winter months.

Together with the Land Resources Department and the Rural Development Department, through a convergence programme, she however said, “we are putting our resources together to address this problem of dying springs through an approach that has worked in states like Sikkim and other states with similar terrain called the hydrogeology based springshed rejuvenation. We are piloting this programme in 100 villages in all 11 districts.”

Despite the fact that there is no scheme or programme on reviving springs, recognizing the impact on weather patterns and on rainfall that springs depend on for replenishing its aquifer, the stakeholders have pooled resources for this critical issue.
“Based on the outcome of this pilot the stakeholder’s vision is to revive springs in the remaining 1000 plus villages in Nagaland,” she said.