Nagaland has most 'manageable' prison system in India: Report 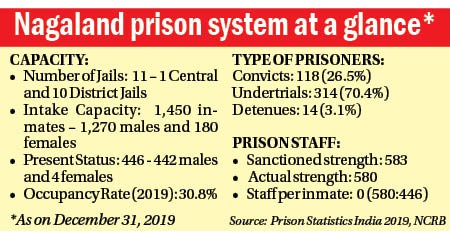 Nagaland has one of the most manageable prison systems in India in terms of occupancy as well as workforce, according to official statistics by Union Ministry of Home Affairs.

According to the ‘Prison Statistics India 2019’ released by the National Crime Records Bureau, the overall prison occupancy rate in Nagaland as of December 31, 2019 was just 30.8%, the best among the States, and second overall after Union Territory (UT) Lakshadweep (6.3%).

Among UTS, Delhi has reported the highest overcrowding (174.9%).

In terms of occupancy in Central and District jails, Nagaland had the lowest rate at just 21.50%, and 37.29% respectively. At just 2.22%, the number of women prisoners in all jails was lowest in Nagaland.

In India, 4, 78,600 inmates were lodged in various jails of the country during the same period.

As per the report, Nagaland does not have Open Jail - special Jails that exclusively confines only convicted prisoners; Sub Jail; Women Jail; Borstal School  (youth rehabilitation centre) or other jails.

No foreign inmates were reported in Nagaland, Arunachal Pradesh, Sikkim, Dadra and Nagar Haveli, Daman & Diu and Lakshadweep as on December 31, 2019, according to the report.

A common feature observed in all the States/UTs is that the prisoners sentenced to imprisonment for a longer period (more than 2 years) are confined in the Central Jails, the report said.

Staff Strength
On the other hand, information on the sanctioned strength as well as actual strength of the staff in various jails as on December 31, 2019, revealed said that Nagaland has filled 99.49% of the sanctioned post, only below Daman & Diu (100.0%). The third was Arunachal Pradesh 93.05%.

State/UT wise comparison of vacant post data by the NCRB highlighted that Uttar Pradesh had highest number of vacancies (5,583) followed by Bihar (3,781) and Jharkhand (1,639).

Prisons Staff Strength, based on their duties and responsibilities are categorised into the following five categories: Executive, Medical, Correctional, Ministerial and Others.

Accordingly, against a national average of 7 inmates per Jail Staff, Nagaland has ‘zero,’ denoting a situation of surplus Jail Staff above current inmates.

For a sanctioned strength of 583, Nagaland had total of 580 Prison Staff (including ministerial staff and others) against 446 inmates, denoting 3 vacancies.

According to the report, the vacancies were at the top – 1 DG/Addl.DG/IG, 1 DIG and Correctional Staff (Probation Officer /Welfare Officer).

However, only one Correctional Staff was looking after 446 prison population in Nagaland while the average was 89 inmates per medical staff (pharmacist) at 5.