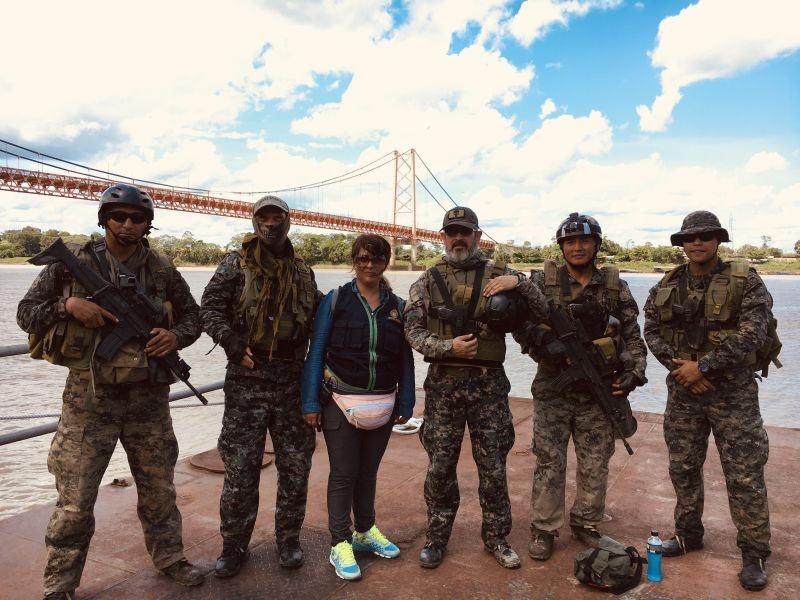 "Bingo!" exclaimed Garay from behind her designer, diamante sunglasses, an environmental prosecutor for the Amazon rainforest region at the centre of Peru's gold rush.

On a floating raft was a rudimentary dredger used by illegal miners to suck up river silt to mix with mercury and extract gold grain while dumping toxic waste in the river.

A navy captain jumped off the speedboat and cut the hand-made sluice while a marine in the group prepared dynamite.

"Working with explosives, your first mistake is your last. You don't get to tell the tale," he said, before moving the speedboat to the opposite riverbank and yelling: "Fire!"

It was just another day's work for Garay on the frontline of government efforts to seize control of vast jungle areas of Madre de Dios - the scene of a modern-day gold rush after global prices spiked and a new road opened up this remote part of Peru.

"It became no-man's land," Garay told the Thomson Reuters Foundation in her office where, next to a tome of Peru's penal code, sits her collection of Wonder Woman dolls.

"The state didn't have control over it."

Asked about the doll collection, she said she drew inspiration from the character she saw as a local heroine.

Rather than the stars-and-stripes wearing U.S. figure, she admired comic creator Stan Lee's version of Peruvian Wonder Woman Maria Mendoza, who was given powers by the Inca Sun God.

"She's an Andean Wonder Woman named Maria de Amazonas, who fought the mine looters in the time of the Inca Empire," explained Garay.

Nearly one third of Peru's gold exports are illegally sourced, according to a 2016 report by Swiss think-tank, the Global Initiative Against Transnational Organized Crime.

Tens of thousands of miners have flocked to Madre de Dios, mainly from Peru's poor Andean highlands, hoping to earn a living, while playing a cat-and-mouse game with authorities who have struggled to combat the illegal trade.

Across the region, illegal mines became a magnet for criminal gangs as well as sex traffickers working in and around the town of La Pampa.

Two factors sparked an explosive boom. The global financial crisis in 2008 - and the completion of the long-awaited, 1,600 miles (2,600 km) Interoceanic Highway cutting through Madre de Dios's forest and connecting the Pacific with the Atlantic.

Appointed chief environmental prosecutor when Operation Mercury began, Garay has become a fixture of the regular raids and the driving force behind a steady rise in prosecutions.

The government set up six military and police bases in La Pampa, a city now of 25,000 people and hub of sexual exploitation of women and girls in the bars popular with miners.

Under Garay's watch at least 20 people have received prison terms for illegal mining and more than 100 been convicted for smuggling diesel, while prosecutors have convicted at least 22 people for human trafficking, mostly involving child sex abuse.

"About five years ago this was a place that was a couple of miners, a couple of tents," said Luis Fernandez, an expert on the toxic fallout caused by mercury on the environment.

"The price of gold started to rise and in 2008 it sky-rocketed. That created the unprecedented gold boom in which tens of thousands of miners ... started to take the forest apart," said Fernandez, who heads the locally-based non-profit Center for Amazonian Scientific Innovation (CINCIA).

The gold rush has destroyed swathes of once pristine forest in one of Peru's most biodiverse regions.

The fight against illegal mining is part of a wider drive against corruption led by Peru's President Martin Vizcarra and for Garay, being an anti-corruption crusader is a key.

"From the first moment Operation Mercury started, I made things clear. I wasn't going to accept any act of corruption," said Garay, who trained as a lawyer and previously worked as a criminal and environmental prosecutor in her home town of Cusco.

As a young prosecutor, Garay rose to prominence leading successful investigations against illegal logging in the Amazon.

A single mother, she left her young son with her mother in Cusco in 2018 to lead Operation Mercury from Puerto Maldonado, a six-hour drive away and capital of the Madre de Dios province.

Despite the sacrifice, she said it was worth it.

At her disposal are helicopters and satellite images to monitor forest cover and illegal logging in real-time to help trace the criminal networks who launder tonnes of dirty gold largely through neighboring Brazil and Bolivia.

Garay said her role was not to stop all mining but to support mining that fulfils environmental agreements.

It's an approach that has resulted in a "big win" for conservation, according to environmental group, the Monitoring of the Andean Amazon Project (MAAP).

Since Operation Mercury started, deforestation caused by illegal mining has dropped by 92% in La Pampa - from 173 to 14 hectares a month, according to MAAP satellite images.

But the raids on illegal miners continue at a rapid pace.

In one raid late last year by Garay's team - which the Thomson Reuters Foundation joined - four miners were caught red-handed by armed troops and their equipment set ablaze.

"This business of illegal gold is as profitable, or more, than drugs," said Cordova, with gold prices soaring to a record high in August, passing $2,000 an ounce for the first time.

A 2016 report by the Global Initiative Against Transnational Organised Crime found that in Peru and Colombia - the world's largest cocaine producers - the value of illegal gold exceeded the value of cocaine exports.

Hidalgo wants to put the biodiversity and sustainable tourism and farming at the centre of the economy but this has meant the loss of jobs for about 30,000 miners, many small-scale and working illegally, as Operation Mercury closed mines.

Hidalgo acknowledged other mines - and resulting deforestation - had since sprung up elsewhere and it is a major challenge to bring illegal miners in the formal fold, but stressed the wealth from gold has not benefited the province.

"None of this stays in Madre De Dios. The gold is taken out as contraband and goes to Brazil or Bolivia," said Hidalgo, a medical doctor of Peruvian-Japanese descent.

Farmer cooperatives, forest restoration projects, and fish farms have been introduced as new livelihoods, but former miners, like Reynaldo Saavedra, say they have few options now.

"It's just as if you were taking the bread out of someone's hand and repaying them with nothing, not even crumbs to eat," said Saavedra, who is trying to earn a living as a taxi driver.

The coronavirus pandemic hasn't stopped raids or Garay's determination - despite her own battle with COVID-19 in July.

About 270 raids have been carried out since mid-March and Garay believes she is on the right path against illegal mining.

"With a little more perseverance, without stopping our operations, I'm convinced that we'll win this war," she said, clasping a Wonder Woman-themed rucksack on her lap.

A longer multi-media version of this story can be viewed at http://longreads.trust.org/item/peru-wonder-woman-gold-mining-illegal-Amazon