Priced out of services, Venezuelans turn creative for water and gas 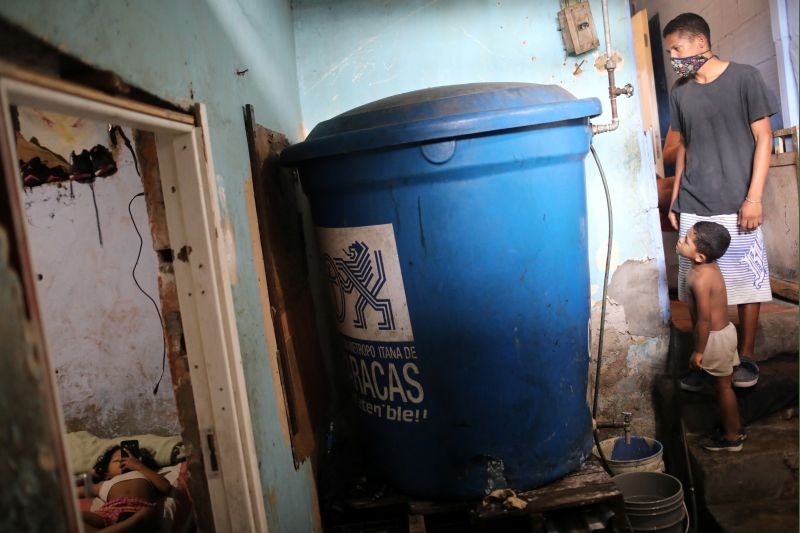 Inside his house, Henry checks the water level of his plastic tank, filled with water by a community-made pipe system that extract water that accumulated at a stalled tunnel construction project near El Avila mountain that borders the city of Caracas, Venezuela on August 8, 2020. (REUTERS Photo)
World
11th August 2020

CARACAS, August 11 (Reuters): Venezuelans are steadily losing access to cheap basic services from water to cooking gas that have helped them survive economic crisis, forcing many to find creative solutions and adding pressure during the coronavirus quarantine.

Services have long been near-free due to heavy subsidies by the ruling Socialist Party, which has overseen a six-year economic collapse despite Venezuela's oil wealth.

But as the decay of state-run utilities has led to constant shortages, Venezuelans now have to pay the equivalent of several months' salary for a few days of water, gas or telephone because private alternatives are priced in dollars.

For those without the money, workaround solutions abound: from wood-burning stoves and long walks to find cellular coverage to improvised pipes for siphoning water off a mountain.

Others simply do without.

"Every week, we adjust to what happens," said Geraldine Escalante, a cook in a coastal area of Vargas state.

She went for a month-and-a-half without water until April, when she paid $20 for a cistern with 2,000 liters (529 gallons) which lasted a week. At other times, she and other residents link hoses between different communities to share water or carry bottles back-and-forth for several kilometers.

Access to running water is particularly crucial to curb the COVID-19 disease, which is running rampant around South America.

The generous oil-financed subsidies begun under late socialist leader Hugo Chavez have gradually disappeared under his successor President Nicolas Maduro. He has eliminated years of price and currency controls amid U.S. sanctions that have further weakened an already foundering economy.

The Information Ministry and state service companies did not reply to requests for comment.

Yusbel Castro, a community leader in Caracas' poor west end, was driving around the city trying to find subsidized gas to fill a 20 kg propane tank for less than $1 to fuel stoves at a communal soup kitchen she runs.

But during one recent search in June, she only found black market resellers charging $7, equivalent to more than two months of minimum wage salary.

Unable to afford it, Castro could not cook lunch for the 110 children who rely on the soup kitchen. It frequently serves beans or soups, which cook for longer than other foods and therefore require more gas.

Just 3 in 10 Venezuelans in May could obtain gas at regulated prices while only 1 in 10 received running water, according to data from the non-profit watchdog Venezuelan Observatory of Public Services (OVSP).

While water costs less than a dollar per month at subsidized rates, cisterns can cost $100.

Service interruptions now affect both wealthy neighborhoods and the slums. "The crisis in public services has put the poor and rich on equal footing" in that respect, said economist Luis Pedro Espana during a presentation of a demographic study last month that showed poverty reached 65% of households.

"That is the paradox of the Venezuelan state: it remains powerful in social control but is fading away as a provider of public goods and services," added Asdrubal Oliveros, head of the local Ecoanalitica consultancy, to Reuters.

A group of Caracas residents in June built a system to use water accumulated at a stalled tunnel construction project near the El Avila mountain bordering Caracas.

They used 1,300 meters of hoses for the network and the residents contributed 10 dollars each to buy parts.

"We can't spend our whole lives complaining," said Wilfredo Moscoso, one of the project's leaders. "We are finding solutions."

In some places, Venezuelans have to walk for kilometers to find a cellular signal.

"The only one way I manage to get even a bit of coverage is when I get up on the roof of the house," said Jose Atacho, a pharmacy manager in the western city of Punto Fijo, who has lines with three different operators to improve the odds.

Working and studying from home during coronavirus quarantine while struggling with faulty connections has led families to rely on pricey mobile phone data services.

In some cases, residents pay up to $30 per month for additional services, compared with the notoriously faulty state-provided internet that costs $2 per month.

In the western city of Maracaibo, Argenis Linares paid for a satellite internet service and charges people several dollars per month for access. "Some neighbors asked me, especially the friends of my kids, to do their homework," he said. "Two are in a tough situation and they just pay what they can."