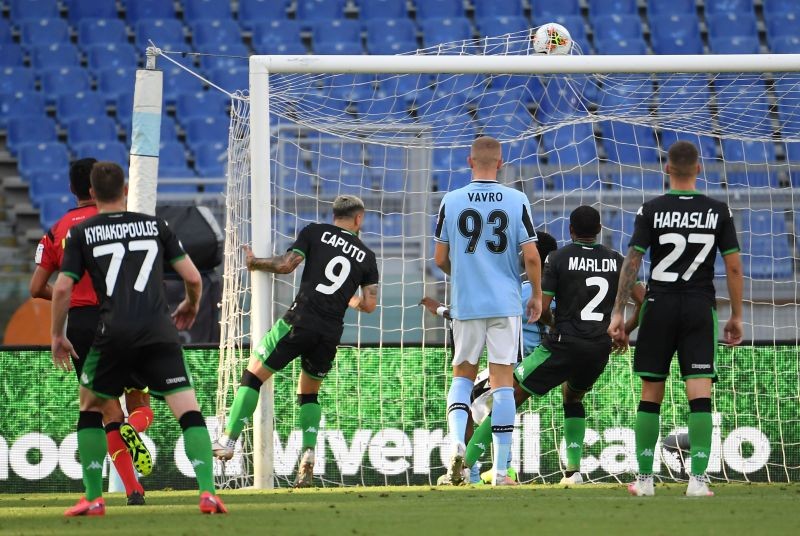 ROME, July 12 (Reuters): Second-placed Lazio slumped to a third successive defeat in the Serie A title race when they were beaten 2-1 at home by midtable Sassuolo in stifling heat at the Stadio Olimpico on Saturday.

Halftime substitute Francesco Caputo headed in from point-blank range in stoppage time as the visitors hit back after trailing at halftime.

Lazio remained stuck on 68 points, seven behind Juventus who were at home to third-placed Atalanta (66 points) later on Saturday. Sassuolo are eighth with 46 after their fourth successive win.

It was another subdued performance by Lazio who were on a 21-match unbeaten league run and one point behind Juve when Serie A was suspended by the novel coronavirus pandemic in March.

Their injury-plagued squad has lacked the strength-in-depth to contend with a hectic fixture list and they have lost four out of six games since the restart.

"We need to get some more points and claim our title, which is a place in the Champions League," said Lazio coach Simone Inzaghi. "It's rash to talk about the (Serie A) title now, whereas before the stoppage we said we would believe in it until the end."

Giacomo Raspadori, making his first-ever Serie A start, had the ball in the net for Sassuolo after nine minutes but the goal was ruled out after a long VAR review.

Replays suggested that the ball was played to Raspadori by Lazio midfielder Marco Parolo as he tackled Mehdi Bourabia and the referee appeared to rule that Parolo's touch was accidental.

Lazio had another letoff two minutes later as Filip Djuricic hit the crossbar.

But they took the lead in the 33rd minute when Manuel Lazzari found the energy to run half the length of the pitch and cross to Luis Alberto who, after a heavy first touch, managed to score despite Manuel Locatelli's challenge.

Sassuolo replied seven minutes after the restart when Caputo got free on the right, rolled the ball to Raspadori and the 20-year-old was this time able to celebrate his first Serie A goal.

Serie A's leading scorer Ciro Immobile curled one wide and Bastos headed over as Lazio rallied, only to suffer a knockout blow.

The ball was swung in from the left, Gian Marco Ferrari got up at the far post and headed the ball across goal for Caputo to nod into the net.