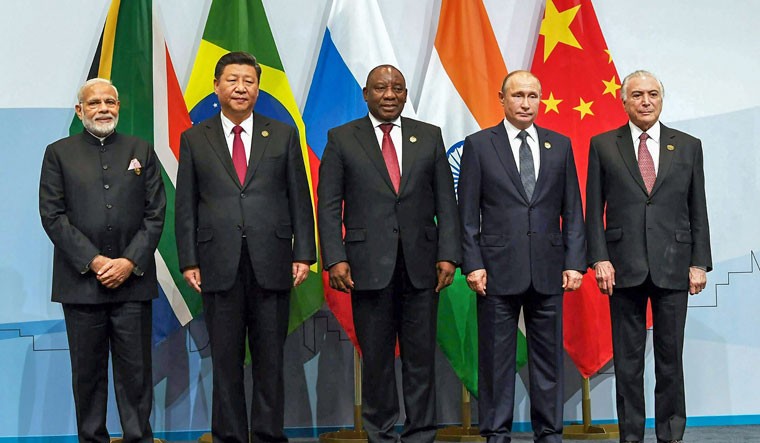 New Delhi/Moscow, July 23 (IANS) Over a month after the India-China faceoff along the Line of Actual Control (LAC) in eastern Ladakh, Russia on Thursday said that it is satisfied with India's cooperation at BRICS -- the multilateral forum which includes China.

In a webinar on 'Russia-India Relations and Pandemic Test of Global Governance', Russian Ambassador to India, Nikolay R. Kudashev, said, "We are very satisfied with the cooperation with India in the bilateral format as well as in the framework of BRICS, especially amid the Russian Chairmanship in the grouping in 2020."

The Covid-19 threat, he said, represents the opportunity to unite the efforts against the common challenge.

"That is why the relevance of BRICS (Brazil, Russia, India, China, South Africa) is growing, offering platforms for dialogue on a wide range of issues of global and regional cooperation, as well as practical partnership between the five nations," he said.

BRICS, he said, was not invented to fight or contain anyone, rather than to support the efforts of the international community on the issues related to peace and sustainable development, democratisation of global governance, financial and economic architecture reform, and promotion of humanitarian contacts.

The ambassador said that Russia was against any unilateral geopolitically motivated actions and illegal extraterritorial sanctions, which create instability, mistrust and unpredictability. He, however, did not specify whom he was alluding to.

"This shared approach is vividly materialised in our growing coordination in various UN bodies, G20, East Asian Summit, OPCW and other structures. We proceed from the understanding that search for the unifying agenda and expansion of the common ground to find solutions for global challenges," he said.

Kudashev said that there are increasing expectations from India -- as a non-permanent member at the UN Security Council (UNSC) next year -- that it will further enhance its coordination within BRICS on the current international agenda.

"We believe that moving towards these tasks we will approach the upcoming summit of BRICS in St. Petersburg this autumn with solid achievements and plans, which would lay ground for the coming Indian chairmanship in the grouping in 2021," he added.

The Covid-19 outbreak brought a lot of changes, he said, adding that this is a challenge for international relations as well.

"It is particularly important that the principles, which represent the basis of our special and privileged strategic partnership, remain unchanged: Mutual respect, commitment to the central role of the UN, etc.," he said.

Against the backdrop of the Covid-19 pandemic, Russia and India are "together moving towards just and equal multipolar world", he said.

At the same time, it is equally important that the future of the world should be based on international law and clear principles of the UN Charter, he added.