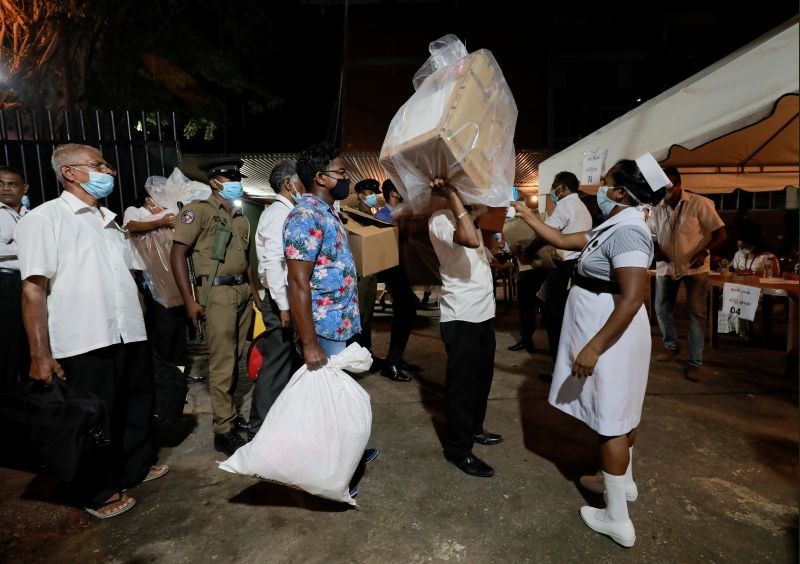 A health official takes the temperature of election officials who arrive with ballot boxes from a polling station to a counting center, after the voting ended during the country's parliamentary election in Colombo, Sri Lanka on August 5, 2020. (REUTERS Photo)
World
6th August 2020

COLOMBO, August 6 (Reuters): Sri Lankan President Gotabaya Rajapaksa's ruling party on Thursday took an early lead in vote counting after a parliamentary election that he hopes will clear the way for constitutional changes to make the presidency more powerful.

Close to 70% of eligible Sri Lankans voted in Wednesday's election to the 225-member parliament, shrugging off their fears of the coronavirus. Counting of votes began early on Thursday, and the final tally is expected by midnight.

Rajapaksa's Sri Lanka Podujana Party (SLPP) was leading in nine out of 13 electoral districts from which early counting trends were available, the information department said. There are in all 22 districts.

Rajapaksa hopes to install his older brother Mahinda Rajapaksa - also a former president - as the next prime minister. The brothers are best known for crushing the Tamil Tiger rebels fighting for a separate homeland for minority Tamils during the elder Rajapaksa's presidency in 2009.

Early counting showed that the Rajapaksas, who have long championed the cause of the island's Sinhalese Buddhist majority, were on track to win 70% of the vote in the Sinhalese-dominated south.

The SLPP was trailing a regional group in the minority Tamil-dominated north of the island.

The tourism-dependent nation of 21 million people has been struggling since deadly Islamist militant attacks on hotels and churches last year followed by lockdowns to slow the spread of the coronavirus.

President Rajapaksa needs a two-thirds majority in parliament to be able to restore full executive powers to the presidency, which he says are necessary to implement his agenda to make the country economically and militarily secure.

A previous government led by the opposition had amended the constitution and set up independent commissions to oversee the police and the judiciary among other arms of the government.