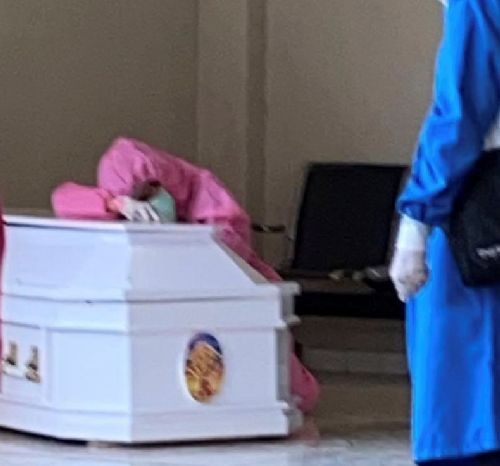 A doctor grieves after her husband, a doctor and chair of the West Papuan doctors' association in Indonesia, died of the coronavirus disease (COVID-19), in Makassar, South Sulawesi Province, Indonesia on August 27, 2020, in this picture obtained from social media. (REUTERS Photo)
World
27th August 2020

JAKARTA, August 27 (Reuters): Photographs of a grieving wife bent over the coffin of her dead husband, an Indonesian medical doctor, have drawn attention to the high death toll of healthcare workers in the Southeast Asian nation.

The photographs, taken at Wahidin Sudirohusodo hospital in Makassar, South Sulawesi, on Thursday morning, and shared with Reuters by Indonesia's Medical Association (IDI), have been widely shared on social media.

They show a woman, whose face is barely visible, dressed in a pink hazmat suit, gloves, and turquoise mask, alone as she rests her head on a white coffin.

The Indonesian medical association said the woman's husband, Dr Titus Taba, who was head of the IDI in West Papua, was the 94th Indonesian doctor to die from COVID-19, the respiratory disease caused by the novel coronavirus.

Halik Malik, spokesman for the association, said that the limited amount of protective equipment, isolation rooms and low screening of patients, had led to a high fatality rate among doctors.

"The number of doctors dying in Indonesia is still relatively high, even increasing in the past two months," he said.

Indonesia is grappling with one of the worst outbreaks of the virus in the region. In India, a country with more than three times the population and more than 3 million cases, almost 200 doctors have died from COVID-19, the Indian Medical Association told local media in early August.

Indonesia reported its biggest daily increase of coronavirus infections on Thursday, with 2,719 new cases. It has recorded