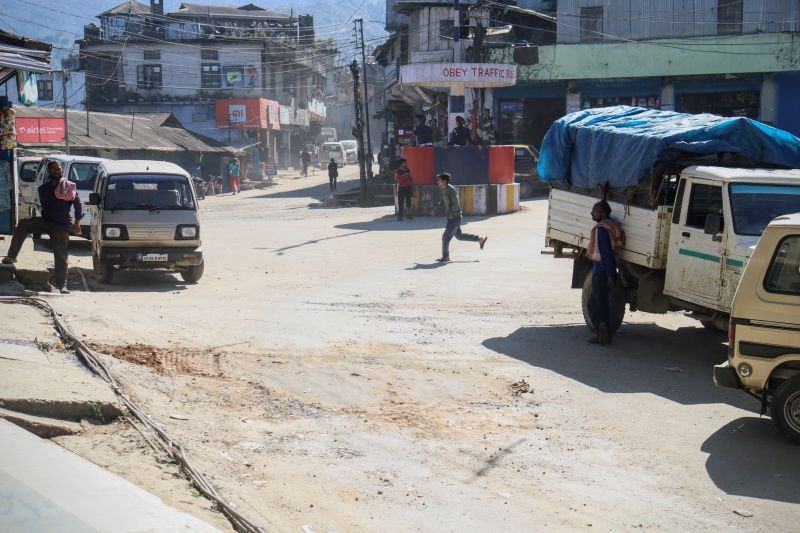 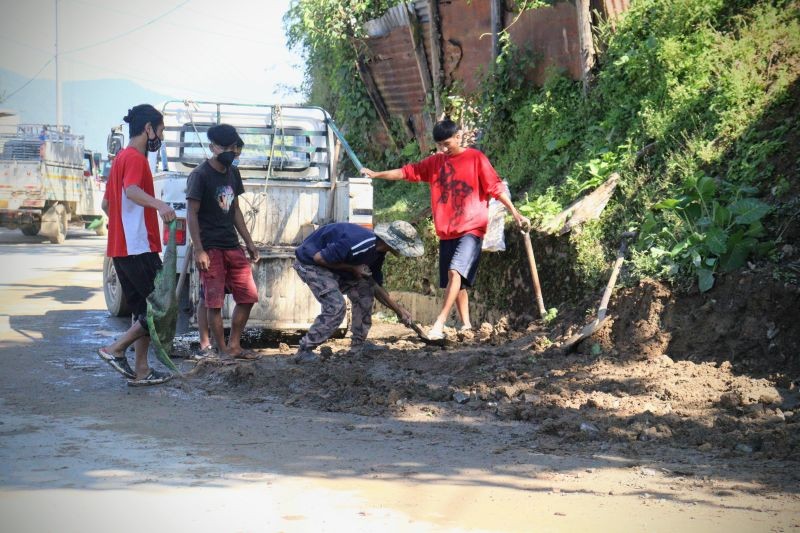 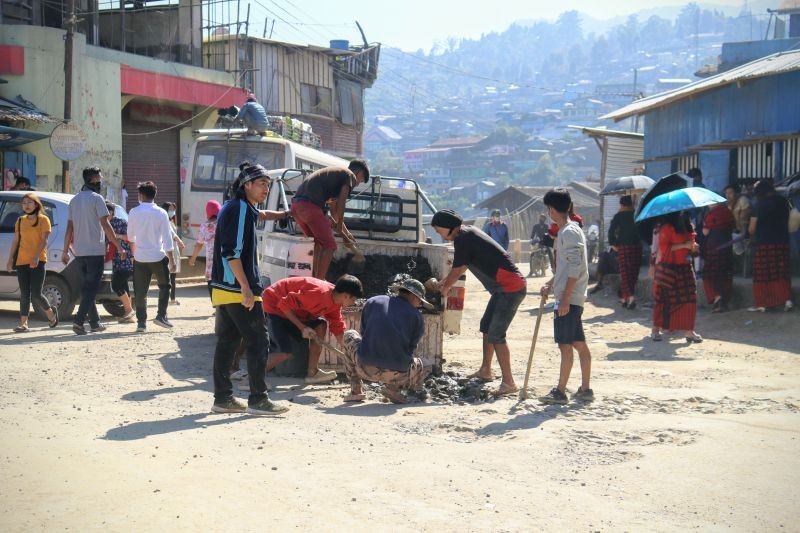 Members of The Gigglers and United Labours Society filling up a pothole with gravel and soil at High School Junction, Tuensang town on November 7. (Morung Photo)
Morung Exclusive
14th November 2020

Young people in Tuensang come together for change

Active citizenship means people getting involved in their local communities and democracy at all levels, from towns to cities to nationwide activity. It can be as small as a campaign to clean up your street or as big as educating young people about democratic values, skills and participation.

In this two part series, The Morung Express explores how three groups of young people in Tuensang town have come forward to improve the quality of life for its citizenry.

On November 7, two groups—The Gigglers and United Labours Society, Tuensang, armed themselves with spades, shovels and other tools and set out on a mission with the motto ‘We care for Tuensang.’

The groups, comprising of youngsters aged between 16 to 30 years, filled potholes on the road stretching from Loyem Memorial Ground junction till Bazaar Police Point in Tuensang town.

30 year old President of the United Labours Society, Changsomba Chang told this newspaper that the main target of the initiative was to “open up the eyes of the people towards owning up to responsibilities.”

“Potholes have been a major problem in our place for a long time and we only complain but do nothing about it. Through this small initiative, we would like to awaken the conscience of citizens as well as the departments,” he added.

For the 22 year old LK Asangba who heads ‘The Gigglers,’ a popular meme that depicted deplorable roads with the caption ‘Rasta Khoi? (Where’s the road?),’ inspired him to do something about the appalling condition of roads in the town.

He lamented that there were not many people who responded positively when he shared his thoughts on how the roads could be improved, until he met Changsomba, who wanted to do something about the cleanliness of the town.

The duo found out that their ideas ‘matched’ and soon, ‘We Care for Tuensang, Free Will Contribution Project 1’ materialized.

With a zero budget, they set the wheels in motion and received response from 21 young volunteers as well as a few well wishers and their families who contributed soil, stones, spades, pickup trucks and refreshments.

On the first day, they collected all the materials and dropped stones at the designated points. The next day, they started their work early at 6:00 am and by 2:00 pm, the potholes were filled and levelled.

The youths were quick to acknowledge the help they received while they carried out their project.

“We thank the Tuensang District Administration for willingly allowing us and especially the traffic personnel who were with us from the start till the end, controlling the traffic while we worked. Particularly I Chuba Chang and his family for their timely help in providing all materials that we needed,” said Changsomba.

As Changsomba narrated that passersby would stop and ask them if they are working for wages or had taken up any contract, Asangba interjected, stating “We are just students, drop-outs, unemployed youths but we didn’t do it for any scheme or funds. It is just a free will contribution for the welfare of the town.”

“We only want to convey that if a small group like us can do it then why not everybody? We have always complained about bad roads and potholes. Who will look after it? This is our road and we should take responsibility in taking care of it,” he asserted.

“The concerned department has failed us time and again. But if a few young likeminded people like us can show unity, just imagine what the people in higher positions or government can do for us?” he added.

Their next target is to initiate a cleanliness oriented project in the town itself and they are open to welcome any volunteers for help.

This is the first of a two-part series.