Test of endurance and logistics as soldiers guard peaks at 17,000 ft 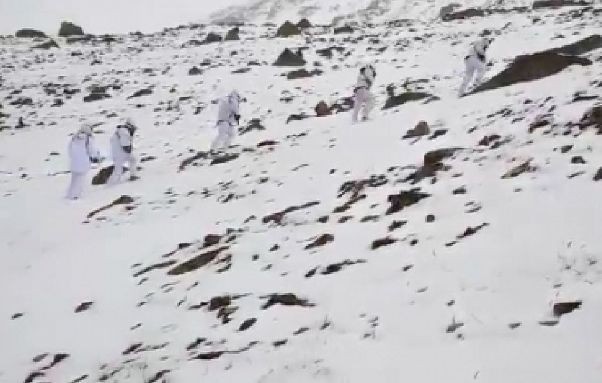 New Delhi, October 3 (IANS) : For over a month soldiers are perched on peaks rising to 17000 ft as a turn-around of all troops is yet to happen because of the terrain and logistics. On August 29, in a sudden stealth operation carried out mostly under the cover of darkness, India occupied critical heights and mountain passes along the South Bank of the Pangong Tso, a glacial lake at 16000 ft.

Winter is approaching and the battle of nerves along the disputed border is fast turning into a battle of endurance and logistics. "It may be incorrect to say that no troops have been turned around in 'an absolute term'," a senior official with direct knowledge said citing rules for speaking to the media.

"Only food and water are being reached to these points," a second senior official. The six month long border dispute between nuclear-armed nations is now turning into a test of endurance and logistics as both sides have dug in.

Indian Army Spokesperson Colonel Aman Anand was unavailable for comment over the turn-around of troops.

Multiple-round of talks between senior military personnel and political representatives failed to yield results. "There has been no thinning of troops," said a second senior official.

Soldiers holding on the peaks for more than a month include those from the Special Frontier Force (SFF) - a special force comprising Tibetan refugees raised after the India-China war of 1962.

China, too, has deployed troops a few metres away from Indian position in the heights.

The SFF troops are holding 13 critical heights which were never held in the 1962 war and do not have basic shelter even. With winters setting in, the mercury is dipping to minus eight degrees Celsius after sundown.

"No temporary structures have been built at these heights. There are no roads or infrastructures on these heights," the official added. China too is facing logistical issues in holding corresponding positions.

Even in such a bad situation, the troops are on high alert as the PLA has also deployed soldiers few meters away at some of the critical heights.

There would be no thinning of force at these heights till the time China completely withdraws its troops, said a source.

On August 30, India has occupied critical mountain heights on the southern bank of the Pangong Lake like Rechin La, Rezang La, Mukpari, and Tabletop that were unmanned till now. India has also made some deployments near Blacktop. The movement was carried out after the Chinese tried to make a provocative military move.

Now, their position of dominance at these 13 peaks allows India to dominate Spangur Gap under Chinese control and also the Moldo garrison on the Chinese side.

During Corps Commander level talks, China is now insisting that India vacate these strategic heights. China told India that will not discuss disengagement in Eastern Ladakh, where the build-up by both sides has triggered a war-like situation over the last four months, till the time India vacates strategic positions.

On September 21, Indian and Chinese Senior Commanders held the 6th round of the Military Commander-Level Meeting.

PLA troops are adamant to resolve the situation first on the southern bank where Indian troops are in positions of strength tactically but India wants a roadmap for de-escalation all across Ladakh. India had strongly asserted that the Line of Actual Control (LAC) should be drawn out.

India and China are engaged in a six-month-long standoff at the LAC. Despite several levels of dialogue, there has not been any breakthrough and the deadlock continues. A