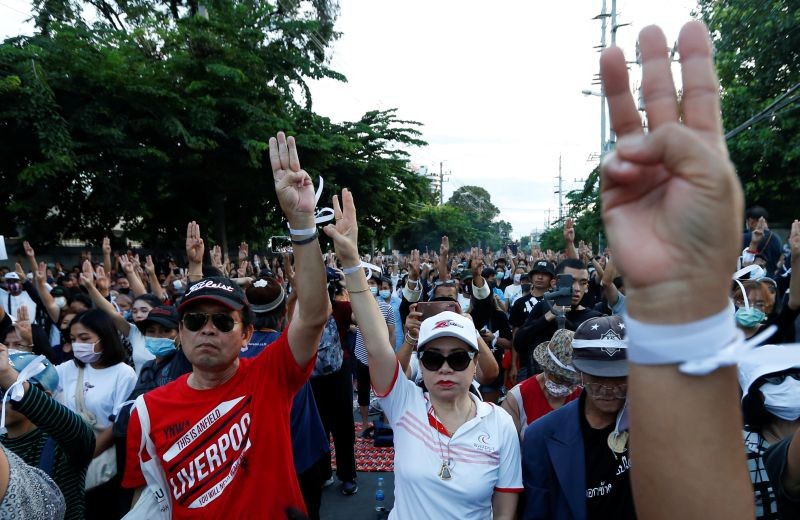 Pro-democracy protesters flash the three-fingers salute while attending a mass rally to call for the ouster of Prime Minister Prayuth Chan-ocha and reforms in the monarchy in front of parliament in Bangkok, Thailand on September 24. (REUTERS Photo)
World
24th September 2020

BANGKOK, September 24 (Reuters): Thailand's parliament voted on Thursday to delay making a decision on whether it will amend the constitution, as demanded by anti-government protesters who have demonstrated nearly every day for more than two months.

The parliament, dominated by supporters of the government, opted instead to set up a committee to study the process of the constitutional amendment first.

"The vote to accept a motion for constitutional changes is effectively delayed to November," pro-government lawmaker Chinnaworn Boonyakiat told Reuters.

The decision angered opposition parliamentarians and protesters, more than 1,000 of whom had gathered outside the parliament to press their demands for constitutional change and for the removal of Prime Minister Prayuth Chan-ocha, a former junta leader.

Protesters say the current constitution was drafted to ensure he kept power after elections last year. Prayuth says the vote was fair.

Wiroj Lakkhanaadisorn, an MP from the opposition Move Forward Party, said the parliament's decision to delay voting on the motion was intended to "deceive the people."

"If the process is delayed by a month to set up this committee, and if the motion is rejected then, it will mean members of parliament cannot propose another such motion again until next year," he said in a tweet.

Siraphop Attohi, one of the protesters, said: "This is a game to buy more time ... We cannot stand by this."

The protests are the biggest challenge to the Thai military and palace-dominated establishment since Prayuth took power in a 2014 coup. The biggest protest drew tens of thousands of people at the weekend.

Some protesters say the constitution also gives too much power to King Maha Vajiralongkorn and have called for his influence to be reduced, challenging a longstanding taboo of not criticising the monarchy.

The 2017 constitution was written by a military-appointed committee and passed a nationwide referendum in 2016 at which opposition campaigning was banned.

The assembly combines an elected lower House of Representatives and a military-appointed Senate.