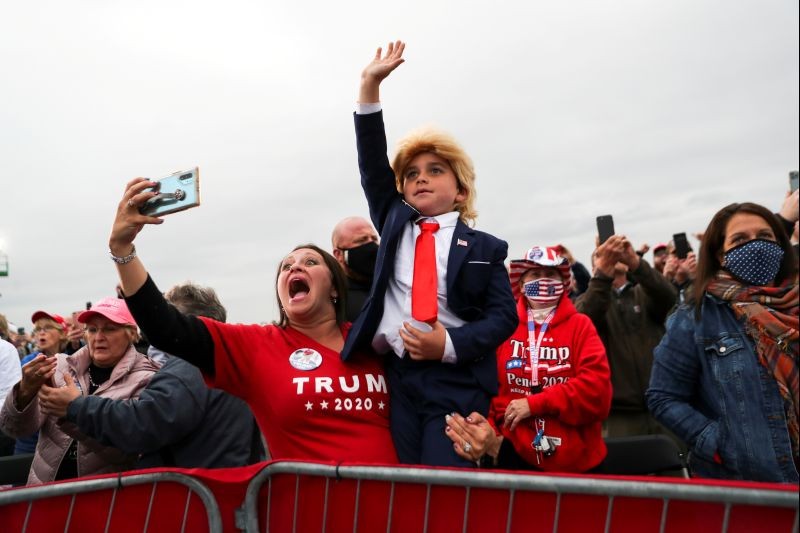 MARTINSBURG, Pa./CHESTER, Pa., October 27 (Reuters): With eight days to go until the U.S. election, President Donald Trump addressed boisterous rallies in Pennsylvania on Monday, while Democrat Joe Biden made a low-key appearance in the state considered crucial to the chances of victory for both men.

"We win Pennsylvania, we win the whole ballgame," Trump told a rally in Martinsburg, his third and final event of the day, as he predicted a win in the state despite trailing Biden in most opinion polls.

Biden made a small-scale appearance in the city of Chester, near Philadelphia, meeting with about a dozen campaign volunteers and speaking with reporters. Biden said he was "not overconfident about anything" and "with the grace of God" he would win Pennsylvania, the state where he was born.

Biden also stepped up his criticism of Trump's handling of the coronavirus pandemic that has killed more than 225,000 people in the United States, saying: "The bottom line is, Donald Trump is the worst possible president, the worst possible person to lead us through this pandemic."

Surging coronavirus cases in many parts of the country have dominated the campaign, along with news of a COVID-19 outbreak within Vice President Mike Pence's staff. Pence, who campaigned in Minnesota, tested negative for the coronavirus on Monday, his office said, after multiple senior aides tested positive over the weekend.

In a case over Wisconsin's election procedures, the U.S. Supreme Court on Monday rejected on a 5-3 vote an effort by Democrats to allow officials in the state to count mail-in ballots postmarked on Election Day, Nov. 3, that arrive up to six days later.

The action by the high court's conservative majority keeps in place a state policy that mail-in ballots must be in the hands of Wisconsin election officials by the close of polls.

Returning to the White House from Pennsylvania, Trump tweeted: "Big problems and discrepancies with Mail In Ballots all over the USA. Must have final total on November 3rd." Twitter flagged the tweet with a disclaimer describing the post's content as "disputed" and potentially misleading.

Experts say, however, it may take days or even weeks to process the huge number of mail-in ballots, spurred by voters seeking to avoid crowded polling stations because of the COVID-19 pandemic.

Some 42.7 million Americans have already voted by mail, part of the more than 63.6 million who have cast ballots ahead of the election, a record-breaking pace that could lead to the highest U.S. voter turnout by percentage in more than a century.

Despite Biden's solid lead in national opinion polls, the contest appears tighter in the most critical battleground states that could decide the outcome. A Reuters/Ipsos poll conducted from Oct. 20 to 26 gave Biden a narrow advantage over Trump in Pennsylvania.

A state where a majority of voters can swing toward either major party, Pennsylvania has been heavily courted with frequent visits by both candidates. Trump went from Allentown to Lititz and then finally to Martinsburg, all towns outside the large suburban hubs where the race may be decided. Trump also planned multiple stops in Michigan and Wisconsin this week, as well as visits to Arizona, Nebraska and Nevada.

Trump told reporters he expected to win Pennsylvania by a larger margin than the 0.72% victory he achieved in defeating Democrat Hillary Clinton in 2016.

Addressing supporters, Trump touched on what he called "an existential" issue for Pennsylvania, Biden's comment during last week's presidential debate that if elected he would "transition" the United States away from oil and natural gas.

"He wants to go with windmills that are made in Germany and China," Trump said, adding: "Biden's plan is an economic death sentence for Pennsylvania's energy sector."

Biden previously said the country should eventually replace oil with solar, wind and other forms of non-polluting power, adding that his plan for a more climate-friendly economy would create high-paying jobs and boost U.S. businesses.

Record numbers of new U.S. COVID-19 cases in recent days have offered Biden's campaign a chance to remind voters of how Trump and his allies have played down the advice of public health experts to wear masks and observe social-distancing guidelines to battle the pandemic.

Trump again asserted that his administration was "doing a great job" against the pandemic and that the United States was "absolutely rounding the corner." He accused Biden of wanting to return to widespread lockdowns that he said would harm the economy.

Trump also won cheers from supporters when he touted his nomination of conservative appellate judge Amy Coney Barrett to the Supreme Court "to defend our God-given freedoms."

The Republican-led Senate confirmed Barrett to the lifetime job on Monday by 52-48, with all Democrats opposed. She was sworn in at an evening ceremony at the White House, meeting Trump's goal of having her in place before the election.