Turning around?: Car registrations in Nagaland back to 96% of pre-COVID level in November 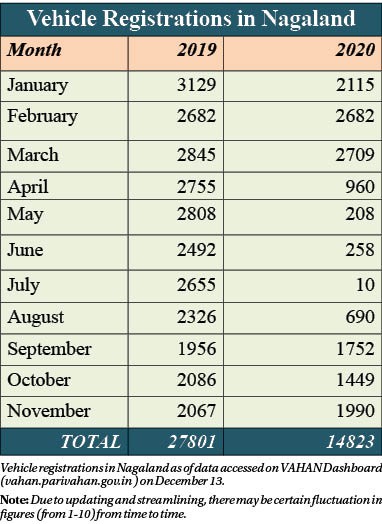 Sales of automobiles continued its upward trend in Nagaland in October and November according to the database on vehicle registration maintained by the Union Ministry of Road Transport & Highways (MoRTH). The trend is continuing into the festive December as per the data available till December 13.

According to the VAHAN Dashboard, vehicle registration in the state increased from 1449 in October to 1,990 in November signifying respectively 69.46% and 96.27% of total registration during the same months last year.

VAHAN Dashboard is an online data repository of all vehicles registration and other related issues in the country developed the National Informatics Centre (NIC) and maintained by the MoRTH.

As reported in the earlier analysis, after falling drastically in the first seven-month of 2020, particularly from April to July, reflecting an adverse impact of COVID-19 in the automobile sector, vehicle registrations gathered some momentum in August and the pace is continuing since then.

As per the Dashboard, the imposition of lockdown due to COVID-19 pandemic had immediate impact on registration witnessing a huge fall from 2709 in March to 960 in April.

The extremely low trend continued for the next three months with 208 in May and 258 in June and the lowest for this year in July with just 10 vehicles.

In September, it gathered pace and shot up to 1752. Though there was a marginal fall in October to 1,449, it further increased to 1,990 in November.

Top category and preferred ‘maker’
According to the Dashboard, there were 15,587 vehicle registrations till December 12 this year with Light Motor Vehicle (LMV) at the top with 5274, followed by Two Wheeler (Non-Transport) – 4527 and Heavy Good Vehicle (HGV) 4044.

The most preferred original equipment manufacturer (OEM) or ‘maker,’ Maruti Suzuki India Ltd led in terms of overall registrations with 3052  vehicles followed by Tata Motors Ltd at 2,999, and Mahindra & Mahindra Limited at 1,353.