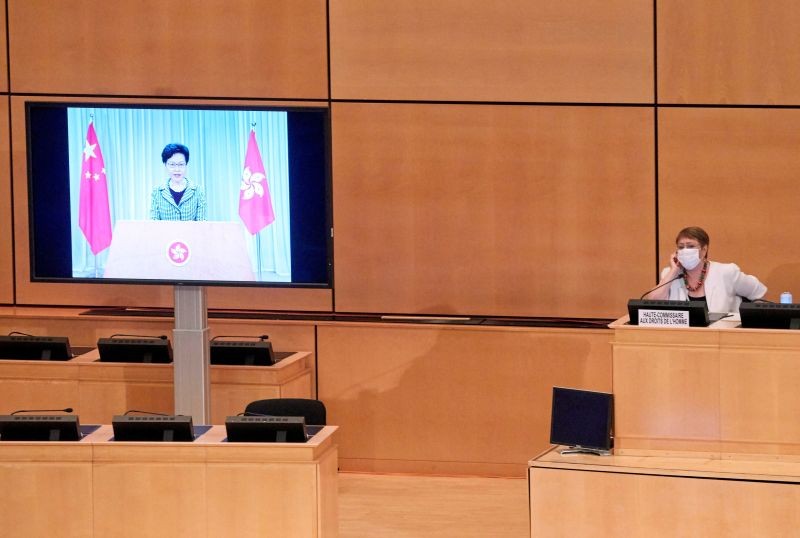 The law approved earlier by China's mostly rubber-stamp parliament follows months of pro-democracy protests in Hong Kong, which was guaranteed freedoms not enjoyed on the mainland under a "one country, two systems" formula at its 1997 handover.

"As Beijing now treats Hong Kong as 'One Country, One System,' so must the United States," White House National Security Council spokesman John Ullyot said in a statement. "We urge Beijing to immediately reverse course."

"The United States will continue to take strong actions against those who smothered Hong Kong’s freedom and autonomy."

Under the law, the crimes of secession and subversion can be punished by terms of up to life in prison.

Authorities in Beijing and Hong Kong have repeatedly said the law is aimed at a few "troublemakers" in Hong Kong and will not affect its rights and freedoms, nor investor interests.

Despite such the assurances, the European Union has warned of serious consequences over the law, which democracy activists, diplomats and some businesses say will jeopardise Hong Kong's semi-autonomous status and its role as a global financial hub

The EU underlined those concerns on Tuesday.

"This law risks seriously undermining the high degree of autonomy of Hong Kong and having a detrimental effect on the independence of the judiciary and the rule of law."

"We will pay careful attention on how to respond," said Ursula von der Leyen, the head of the European Commission, adding that the bloc was discussing possible response measures with "international partners" but without giving details.

Last week, the European Parliament urged the bloc to take China to the International Court of Justice in the Hague, the United Nations' highest legal body, if it went ahead.

"We are deeply concerned by unconfirmed reports that Beijing has passed the national security law," Raab said.

In Tokyo, top government officials called the legislation "regrettable", saying it undermined credibility in the "one country, two systems" formula.

Japan will also communicate closely with the United States and China, as stable ties between the two global powers were vital for regional and global security, Chief Cabinet Secretary Yoshihide Suga told a news conference.

Foreign Minister Toshimitsu Motegi told reporters he shared the "deep concern" of the international community and the people of Hong Kong over the measure.

Taiwan's cabinet said the new law would "severely impact" freedom, democracy and human rights and Taiwan would continue to offer help to people in Hong Kong.

"The government strongly condemns it and reiterates its support for the people of Hong Kong as they strive for democracy and freedom," said cabinet spokesman Evian Ting.

Last year's protests drew wide sympathy in democratic and Chinese-claimed Taiwan, which has welcomed people from Hong Kong who have moved to the island and expects more.

Taiwan President Tsai Ing-wen said she was "very disappointed" by China's move, adding that it showed the "one country, two systems" formula, which Beijing has mooted as a basis for unification with the mainland, "was not feasible".

In a video message to the U.N. Human Rights Council in Geneva, Lam said the city of 7.5 million had been "traumatized by escalating violence fanned by external forces".

"No central government could turn a blind eye to such threats to sovereignty and national security, as well as risks of subversion of state power," she said.