Vatican to push for religious freedom as China deal extended 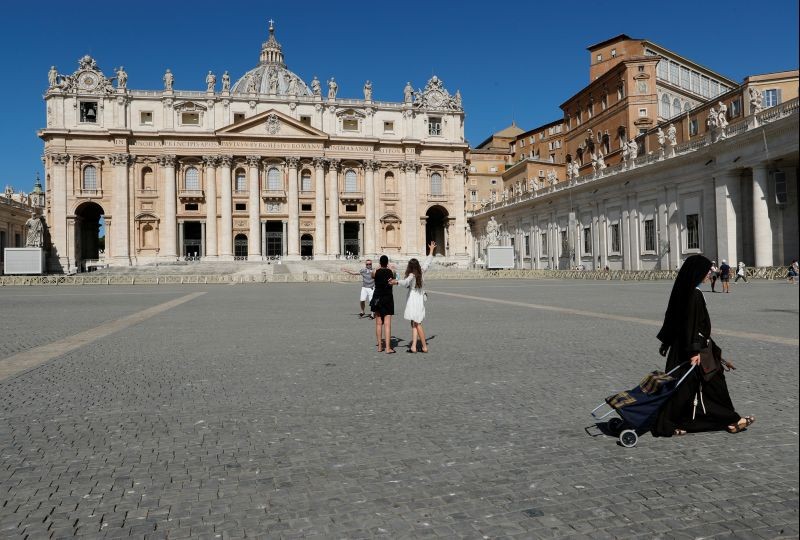 A nun passes by tourists taking pictures on St. Peter's Square as Pope Francis gives his weekly general audience virtually from a library inside the Vatican due to measures to contain the coronavirus disease (COVID-19), at the Vatican August 5, 2020. (REUTERS File Photo)
World
22nd October 2020

VATICAN CITY/BEIJING, October 22 (Reuters): The Vatican and China on Thursday renewed an agreement on the appointment of bishops in China and the Vatican promised to push the communist government to allow more freedom of religion.

The accord gives the pope the final say over the appointment of Chinese bishops, and the Chinese government allows all of them, including those hailing from a state-backed Church, to recognise the pope's authority.

But conservative Catholics have accused the Vatican of selling out to Beijing and last month U.S. Secretary of State Mike Pompeo asked the Vatican not to renew the deal. He set off a diplomatic incident by saying the Holy See was compromising its moral authority.

Beijing and the Vatican announced the two-year renewal in separate statements.

"It must be recognised that there are still many situations of great suffering. The Holy See is very aware of this, it acknowledges it, and will not fail to bring it to the attention of the Chinese government in order favour a more fruitful exercising of religious freedom," the Vatican said in the official newspaper Osservatore Romano.

It did not elaborate, but Church groups in Hong Kong have said Catholics and other Christians in China have faced restrictions such as not being allowed to bring their children to Mass.

The article said the accord was the result of a "continuation of thought" by Pope Francis' predecessors and that the draft "had already been approved by Pope Benedict XVI" before he retired in 2013.

This appeared to be addressed to conservative Catholics, many of whom continue to revere Benedict and distrust Pope Francis.

When Vatican's Secretary of State Cardinal Pio Parolin said at a conference this month that Benedict had approved the draft, Cardinal Joseph Zen, the former archbishop of Hong Kong and a strong opponent of the deal, accused Parolin of lying.

The article acknowledged that in the past two years only a few bishops had been appointed.

"Even if statistically this does not seem to be a great result, it is a good start," the article said.

Many believe it will eventually lead to diplomatic relations with Beijing, meaning that the Vatican would have to sever ties with Taiwan.

But Parolin said on Wednesday that talk of diplomatic relations was premature and that the accord was strictly religious and not political.

"The two sides will continue to keep in close communication and consultation, and continue to push forward the process of improving relations," Chinese foreign ministry spokesman Zhao Lijian said in Beijing.

Taiwan's Foreign Ministry said that according to its information, the Vatican and China had not re-signed the agreement but "reached a tacit understanding to extend the original agreement for another two years and maintain its experimental nature to evaluate the results".

The Vatican has said numerous times that the agreement with China only deals with pastoral issues.

"Taiwan will continue to advance cooperation with the Holy See and the Catholic Church to jointly safeguard the core values of religious freedom and support those who are persecuted for their faith," the ministry said.

The Vatican is Taiwan's sole European ally. Only 15 countries have official diplomatic ties with Taiwan, mostly small and developing countries in Latin America and the Pacific.