Was Rajiv Gandhi the victim of foreign intelligence agencies? 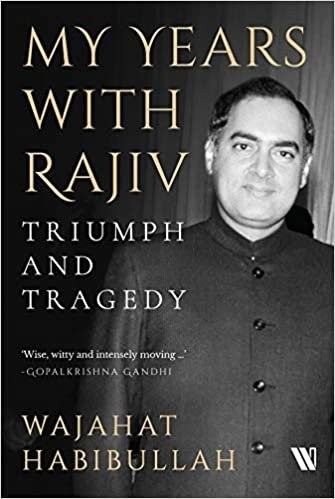 New Delhi, October 24 (IANS): Was Rajiv Gandhi the victim of "international intelligence agencies" in "what was to become" of him after the 1991 General Elections that were likely to see him return to power after being unceremoniously voted out two years previously?

Wajahat Habibullah, who was at school with Rajiv Gandhi, and, as a member of the Indian Administrative Service (IAS), served under him, and before that, his mother, Indira Gandhi, in the Prime Minister's Office , poses the question in his new book "My Years With Rajiv - Triumph And Tragedy" (Westland) -- but leaves it unanswered.

As India's sixth Prime Minister (1984-89), Rajiv Gandhi had been vociferous in championing closer India-US ties, as exemplified by a landmark MoU on technology transfer within a month of his assuming office, a hugely successful visit to Washington in June 1985 and an address to a Joint Session of Congress, the first by an Indian Prime Minister.

This was followed by another visit in October 1987 when the Reagan administration "announced a substantial expansion in trade and the setting up of a bilateral trade promotion group chaired by the private sector with government representation", Habibullah writes.

Along the way came the CrayX-MP/14 supercomputer, in place of a more powerful version that India had asked for, but nonetheless, "its rapid adaptation to India's use by the already highly skilled army of computer technologists, led by the youngsters bred by Sam Pitroda, brought India's revolution in information technology that is surely Rajiv's most enduring legacy", Habibullah writes.

All that, however, came unstuck with Rajiv Gandhi leaving office after the rout of his Congress party in the 1989 General Elections.

"There was to be a contrary footnote with Rajiv leaving office, given the sophistication of Rajiv's PMO under the leadership of Ronen Sen (the Joint Secretary to the Prime Minister) that had crafted foreign relations during his prime ministership, that can only be described as gauche," Habibullah writes.

"The war presented India with several opportunities. India could have demonstrated an unambiguous commitment to the territorial integrity of a sovereign non-aligned nation which, in turn, would have ensured India a prominent role in the post-war security arrangements within the Gulf.

"It was a chance to test the benefits of improved Indo-US ties, at a time when in consequence of Rajiv's own labours, the USA had begun to remedy its Pakistani tilt, cutting aid flows to the country," Habibullah writes.

But with the end of the Cold War, the non-aligned movement (NAM) was in its death throes when Foreign Minister I.K. Gujral "fatuously embraced" Sadddam Hussein in Baghdad during a mission that was meant to rescue some 2,00,000 Indians trapped in Iraq and Kuwait post the invasion.

"The crisis became hostage to the parallel political drama on India's domestic front. Polemic replaced policy. Bowing to the pressures of the left, Rajiv's Congress (I), upon the support of which Chandra Shekhar's government was dependent for survival, launched a tirade against the USA focussed on refuelling permissions given by India to the US planes, a decision Rajiv painted as a surrender of India's sovereign status, overlooking that India itself was routinely given such permission by a host of countries.

"Rajiv was at pains to quietly explain to the US Embassy in New Delhi the domestic compulsions behind his actions and stressing that he had no desire to undermine Indo-US relations that he had himself so caringly wrought," Habibullah writes.

He even travelled to Europe and the Middle East to invoke a NAM peace initiative "to save Iraq from total destruction, only to find Saddam refusing to meet him".

"Given that the LTTE (then engaged in a bitter civil war in Sri Lanka in which India had unsuccessfully tried to broker peace) was a client of Israel's Mossad -- Israel being a frontline participant state in Operation Desert Storm -- and the surety at the time of Rajiv's return to government, in preparing for which he had reached out to the left, this gaffe resulted in what for me has remained an unanswerable question: did international agencies have a hand in what was to become of Rajiv in India's general elections of 1991," Habibullah asks -- leaves the question hanging.

Like is unanswered what brought down a C-130 carrying Pakistani President and Army Chief General Zia-ul-Haq, US Ambassador Arnold Lewis Raphel and several senior Pakistani military officials near Bahawalpur, 500 km from Islamabad, on August 17, 1988, killing all on board.