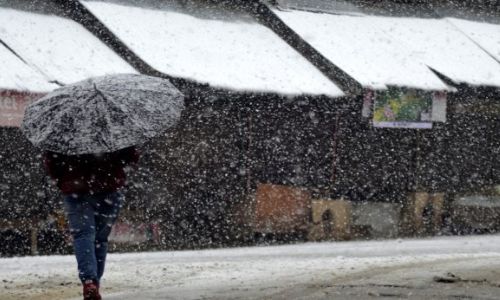 Srinagar, November 7 (IANS) Kashmir witnessed its first snowfall of the season, plunging the mercury to sub-zero in Gulmarg and bringing woes galore as major disruptions are reported on roads, in power supply, besides air traffic being hit. The Met forecasts rain starting Thursday night and continuing on Friday.

The maximum temperature in Srinagar is seven degrees, while as it is minus one degree in the hill station of Gulmarg.

Most areas of the valley have plunged into darkness since last night with 330 KV transmission line disrupted due to snowfall.

"Work is on to restore the 330 KV transmission line that supplies electricity to 200 feeders, 70 per cent of the work has been completed and it is just a matter of a few hours when electricity will be fully restored", District Magistrate, Srinagar, Shahid Chowdhary told IANS.

Snow clearance machines kept on standby have been pressed into service. However, the snow has not been cleared from most of the roads.

"The snow clearance operations have started. The priority is to clear snow from main roads," said Shahid Chowdhary. "Airport and hospital roads are being cleared first."

While the snowfall has been moderate in the plains of Kashmir, the upper reaches have witnessed heavy snowfall.

Traffic on Jammu-Srinagar National Highway has been halted due to heavy snowfall near the Jawahar tunnel.

Hundreds of trucks and passenger vehicles were stranded on the highway.

The Mughal road connecting the valley with the Pir Panjal region was closed for traffic.

The Meteorological Department has forecast more snow on Thursday.

"The snow conditions will persist for today, but there will be a substantial improvement in the weather from tomorrow", Sonam Lotus, Director, Meteorological Department told IANS.

On Tuesday the Met department had predicted snow in Kashmir and also had sent an alert about the temporary disruption of the surface transportation, especially over the mountain passes like Zojilla, Srinagar-Jammu highway, Leh-Manali highway, Mughal road, etc., due to the landslides and heavy snowfall.

"Active western disturbance and its interaction with cyclone Maha (Currently lying over the East Central Arabian Sea) is most likely to cause widespread moderate to heavy snowfall and rain in plains of Jammu and Kashmir and also in Ladakh till November 8. It will peak in the night on November 7," the Met Department said.