From wooden boxes to steel drawers to digital folders 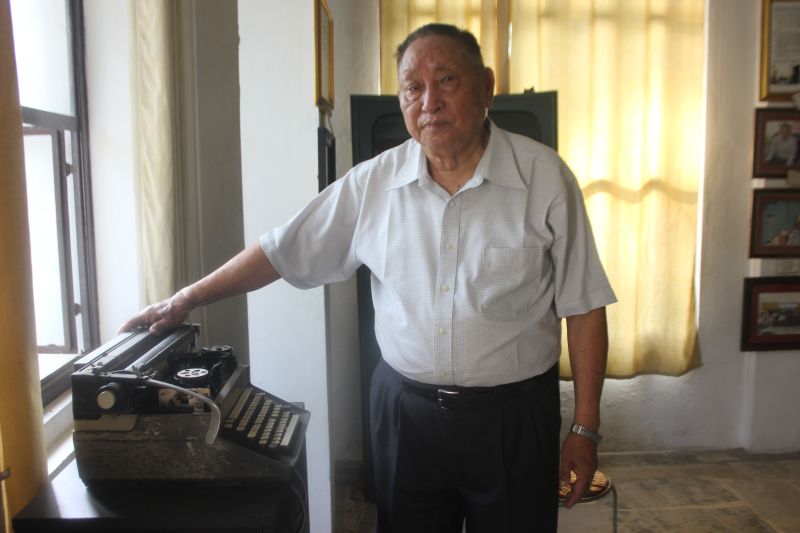 Rev. VK Nuh tells the story of a typewriter from the 1950s at the Naga Archives and Research Centre, Toulazouma – the digitization of documents at the NARC is underway in collaboration with the University of Edinburgh (Morung Photo)

Naga Archives and Research Centre is now being digitized

The Naga Archives and Research Centre (NARC), seen as the “largest repository of historical documents on the Naga political movement and armed struggle,” is going digital.

Set up in 2015 in Toulazouma, Dimapur district, “the archives, comprising entirely of unofficial material, offers the opportunity to study an indigenous movement that, against all odds, has managed to maintain a clear sense of its own national identity,” said Dr. Arkotong Longkumer, Lecturer in Religious Studies at the University of Edinburgh, UK. He will collaborate on the digitization of the archives with the Edinburgh Futures Institute. The School of Divinity at the University of Edinburgh described it as the University’s centre for interdisciplinary work in social and data science, the arts, and humanities, with an emphasis on harnessing data, digital and artificial intelligence for social benefit.

The material at the NARC has been collected from political and religious events, consultations and large public gatherings across the Naga areas over a period of close to a century. The five-month pilot project, which began in May this year, will photograph, scan and catalogue thousands of local publications, documents and souvenirs, together with the pictures of over 50 Naga leaders, stored in the NARC.

“Transferring the data to computer will allow public access to unofficial material that has been collected over 60 years of political conflict, and which was previously subject to censorship,” noted Dr. Longkumer.

With regards to its global and future impact, Dr. Longkumer stated, “The project will establish a template for future digitization programs within the region, and assess the feasibility and scope for a broader program across multiple sites in a larger geographical area.”

The Morung Express spoke to the NARC team to understand the genesis of the archive and its significance.

History of the NARC

Rev. Dr. Vetsotsü Kepfozü Nuh, better known as Rev. VK Nuh, set out on an exceptional journey in 1956. He took the first steps to archive Naga national history. A resolution passed, a memorandum sent, an agreement made, a prophecy delivered—if it was on paper, Rev. Nuh archived it. In 1956, this was easier said than done. The possession of documents like these could get you arrested or, worse, killed. He hid the documents in large empty tin cans of oil or ghee and buried them in jungles, under the ground. When the cans began to rust, he came up with a new idea.

“I made three large wooden boxes, stored the documents in them and hid them inside caves, deep in the hills,” revealed 87-years-old Rev. VK Nuh, the founding chairperson of the NARC, who has personally archived the documents over the past 63 years. As he gives a story-telling tour of the Centre, the listener can only be amazed by his depth of knowledge and memories that accompany each photograph, document or artifact.

Located at his home in Toulazouma Village, the NARC is the enlarged version of what set out as wooden boxes; today it is an open resource for researchers and scholars from all over the world.

The NARC is divided into two prominent sections: the Naga struggle and peace works. With an estimated 40,000 documents stored in 21 steel cupboard drawers, one of its prized possessions is a typewriter purchased, according to Rev. Nuh, in the 1950s from Kolkata as part of the Nagaland Peace Mission that was beginning to take shape through the Nagaland Baptist Church Council.

“The machine was employed to produce all church circulation, minutes and resolutions, correspondences to Federal Government of Nagaland, Government of India, AZ Phizo, and other public leaders,” disclosed Rev. Nuh.

Significantly, a prophecy delivered at the Imphai National Prayer Centre on a mountain top in the Olo Naga areas in Myanmar came to be typed on this typewriter in 1978. It predicted a moment of peace before the Nagas “splinter, wage war and destroy each other.” A year later, killings among Nagas began in the Olo Naga areas followed by the formation of the NSCN and “fulfillment of the prophecy.”

Reiterating the importance of the archives, Rev. Nuh asserted, “Without roots, no tree will produce fruit. The signed documents available at the NARC are the facts of Naga history.” In 1999, he opened his archives to the world for the first time in the form of his ‘magnum opus,’ The Naga Chronicles. Over the years, he has published 30 books on Naga society, church, history and politics. But it is the NARC that he hopes will truly benefit students, as it already has—several scholars from universities like Jawaharlal Nehru University, Harvard University and Columbia University, have used the archives for research work. 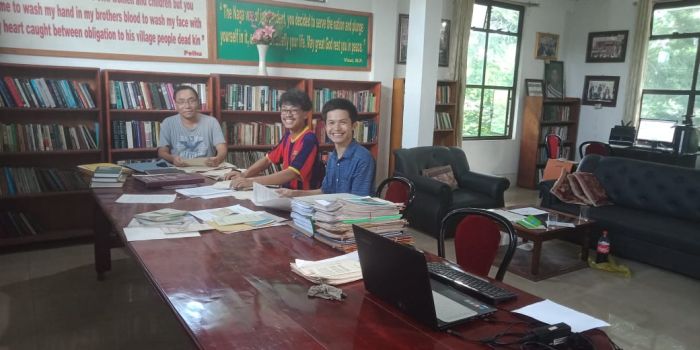 More usage, however, means increasing damage to the decades-old documents and photographs which are in severe need of preservation. The lack of funding has not made this possible so far.

Dimapur district’s heat and humidity have not helped the NARC’s archives. The print on some documents is vanishing, with papers becoming brittle due to termites and the weather, and photographs are fading. The need for digitizing the documents cannot be emphasized enough.

“The collection is in danger,” warned Bethel Nuh Lorin, the NARC’s Coordinator on the pilot project in collaboration with the University of Edinburgh. Till now, she had been maintaining the archives by cleaning them with a piece of cloth. When the project began, “We bought new scanners and hired two interns from Oriental Theological Seminary (OTS) to catalogue, scan and save the items as per Rev. Nuh’s physical classification of the folders.” Seven hours per day were dedicated to the process.

“Digital archiving is a very new thing for us but as we do more, we understand the archiving process better. The digitization will help more researchers access these invaluable archives and originals can be preserved,” she hoped.

Also Rev. Nuh’s daughter, Bethel remembers the “mysterious boxes” in her father’s bedroom which no one had access to. As mentioned before, Rev. Nuh made some of the records public only in 1999, later opening up the archives as part of the NARC in 2015. Bethel explained: “My father is a man of vision who preserved our history and culture. But very few came forward to help him so I volunteered to catalogue the material over the past few years as well as coordinate researcher visits.” Acknowledging that the documents at the Centre are “very fragile” and could be damaged through continuous physical contact, she welcomed the digitization process.

“As a student of history, my research work was primarily based on archival material,” said Dr. Joshua Lorin, Vice Chairperson of the NARC, who is overseeing the pilot project. “My concern is the preservation of the unpublished materials here.”

Dr. Lorin recognized the significance of archives early on while researching for his PhD dissertation at School of Theology, Fuller Theological Seminary. As a church historian, materials he found at the US Archives – like Edward W. Clark’s letters – cleared a lot of misconceptions about, say, American Baptist missionary activities in Nagaland. Today, as the Principal of the OTS, Dr. Lorin’s experience with archives also helps him develop a lucid future of theological education in Nagaland.

As the “only archives of its kind” that contains Naga socio-political history, peace works and church relations among the Naga people, there is an essential reminder of why these archives must be preserved through digitization.

“Lot of what is happening today can be easily resolved by revisiting our history. We cannot expect outsiders to come and preserve our history for us. Though this is tiresome and lonely work, it is our task, and we have to do this before it is too late,” urged Dr. Lorin.

While more hands will be needed over time to materialize Rev. VK Nuh’s dream of making the NARC a Naga national archives, at least the work has begun.

“I do not even know how to operate a phone properly – I am completely ignorant of these modern things,” laughed Rev. Nuh, who clicked many photographs in the archives on a “rotten camera.” “But it is important to digitize all the works here. Generations to come will be thankful for this. Without history, no nation can survive,” he reiterated, hopeful of a brighter, clearer, Naga future based on the “black and white” truth of Naga history. Perhaps, the digitized NARC will show that way.